IPL 2019 Match 4 RR vs KXIP Match Prediction, Preview and Head to Head: Who Will Win? 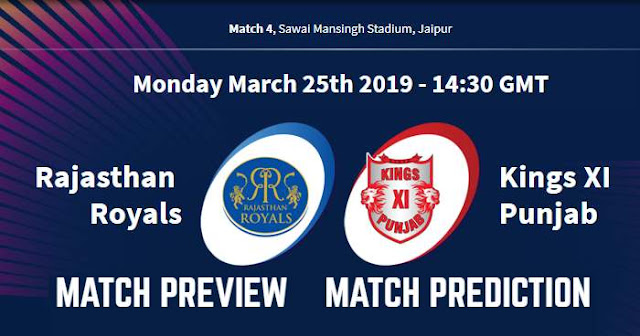 Rajasthan Royals (RR) will take on Kings XI Punjab in the 4th game of the 12th season of Indian Premier League – IPL 2019 on 25 March 2019 at Sawai Mansingh Stadium, Jaipur.

As far as weather is concerned, it will be a pleasant day for cricket; the temperature will be below 30 with a light wind.

It looks like a beautiful surface. If you look closely under the tinge of grass it is a little bit dry but it is rock hard. So it will not have any impact for the spin. The ball will come on to the bat nicely and it is a fantastic strip for batting.

In the last season, Rajasthan Royals managed to finish in the top four but was inconsistent with 7 wins and 7 loses. However, Kings XI Punjab finished at 7th position in last season with 6 wins in 14 matches.

One of the biggest advantages for the team will be the return of Steven Smith, who missed all of last season in the aftermath of the Sandpapergate and by the acquisitions of Jonny Bairstow and Martin Guptill.

Kings XI Punjab are winning despite some flaws in the middle order but would like to continue with the same playing XI which played against Rajasthan Royals in the last match.

At Sawai Mansingh Stadium chasing is much easier under the lights despite the pitch not being batting friendly.