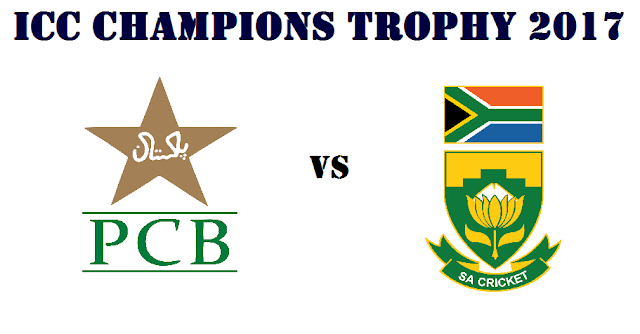 7th Match of ICC Champions Trophy 2017 will be played between Pakistan and South Africa at Edgbaston, Birmingham on 7th June. After the last match on Sunday between India and Pakistan it is raining since then. Match day is forecasted with no rain. But the rain had effect on the match; this match was to be played on the unused pitch but due to rain and softening of the pitch due to moisture now the match is to be played on the pitch which was used for earlier two matches in this tournament. Both the matches at Birmingham had been high scoring and this match also to be high scoring.


Last time when they met was in ICC Cricket World Cup 2015 at Auckland, where Pakistan defeated South Africa by 29 runs. But since the lot had changed, they had on played one match in last 4 years ie; since 2013. In last four matches Pakistan had won three of them. Last time when they played at this ground was in ICC Champions Trophy 2013, where South Africa defeated Pakistan by 67 runs. While they had played two matches at England and both of them are won by South Africa.


Pakistan is coming with the lost against their arch-rival India in this match. Pakistan. When Pakistan came in the tournament their strength was bowling but with seeing the match against India; they had to watch it out for. While their bowling struggle in 1st inning made the batsmen under pressure in the second inning. While their star bowler Mohammad Amir looked helpless.

South Africa is coming with a win against Sri Lanka; they defeated Sri Lanka by 96 at Kennington Oval. They looked all settled and confident. They had gained the momentum needed for the tournament. Hashim Amla in their star player who is in form since Indian Premier League 2017.

Toss:South Africa won the toss and elected to bat first

Man of the Match: Hasan Ali