South Africa and Bangladesh met on 2 June 2019 to play the 5th match of the ICC Cricket World Cup 2019 at Kennington Oval, London. What a win for Bangladesh. Bangladesh won the match by 21 runs. 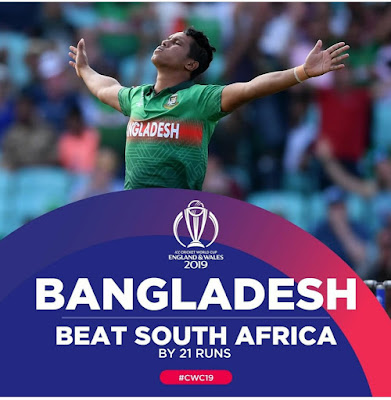 A blistering start for Bangladesh from Soumya Sarkar; losing their first wicket at 60. Soumya scored 30 balls 42 giving which laid the foundation for upcoming batsmen.

Mushfiqur Rahim and Shakib Hassan build the inning for Bangladesh. Mushfiqur Rahim and Shakib Hassan notched their fifth ODI century-stand. There was the time when Bangladesh lost three wickets for 33 runs in 7 overs, despite this lean period in which Tahir and Phehlukwayo made dents, Bangladesh bounced back to regain full momentum in the final knockings of the innings. Mahmudullah and Mosaddek Hossain had a ball finishing off the innings. Mahmudullah provided the finish that his side needed with an unbeaten 46 and Mosaddek scored 20 balls 26. 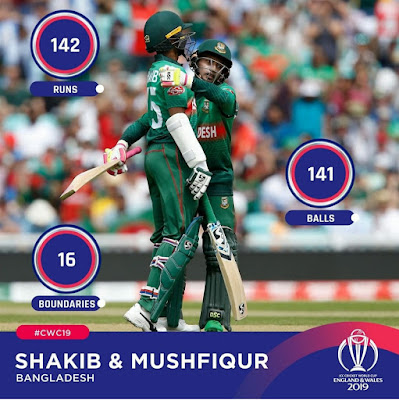 South African bowler looked out of line and length, giving 12 wides. Lungi Ngidi getting got injured and only bowled 4 overs. South Africa also midfield and dropped catches. Imran Tahir, the man playing his 100th ODI, was the best of the lot - but even he bowled his fair share of full-tosses.

330 was, in fact, Bangladesh's highest ODI score of all time. 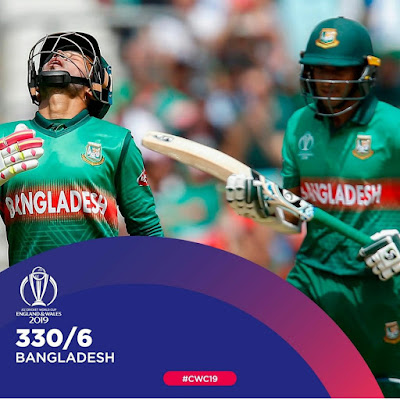 South Africa came to chase 331 but they were unable to chase it down. Proteas lost wickets in regular interval losing their 1st wicket of Quinton de Kock at 49. Aiden Markram (45), Faf du Plessis (62), David Miller (38), Rassie van der Dussen (41) and Jean-Paul Duminy (45) got off a got start but were unable to capitalise into a big inning. The highest partnership was between  David Miller and Rassie van der Dussen of 55 runs.

On the other hand, Bangladesh bowler showed discipline with bowling good line and lengths.

Shakib Al Hasan was the player of the match.


It will be one of our top wins, we've upset a few sides. This is my fourth World Cup, and this is the tournament where we want to prove something. The start can't get better than this. This is the start we needed, we had the belief as we came into England. The dressing room will be happy but they know the job has just started. Confidence is up, but have to play our best cricket against New Zealand, who always do well at ICC events.


Today didn't according to plan. Wasn't ideal with Lungi getting injured, but 330 was out of par. Not a great performance from us. Looking back, no. I wouldn't have bowled first, but the thinking was, the surface was going to have more pace and bounce. If a subcontinent side gets runs on the board, they could squeeze it later. Even with Lungi's injury - he's out death bowler with KG - to go for 54 of the last four was damaging. We came here with a fast bowling attack we wanted to have, not quite sure of Lungi's hamstring injury, it can be a few days or a week off. Dale Steyn is bowling in the middle now, hopefully, there's some progress. It won't get easier from here, South Africa a proud sporting nation. Skills weren't there, but we'll fight. We're firing at 50-60 percent.


We were pleased to bat first after the toss, yes there was some doubt but we knew this was a used wicket, so batting wouldn't be a bad option. Mushfiqur always plays that kind of innings, Shakib batted so well. Soumya set the tone and we finished off with Mahmudullah and Mosaddek. We knew we had to bowl in the right areas, just keep changing our bowlers around to ensure we pick wickets. Good thing we were able to do well, spinners set the tone. The crowd was behind us, thanks to all the Bangladeshi crowd, hopefully, the expats will come back to support us. Back home, those watching on TV will also expect us to win. Hopefully, the New Zealand game will go well too.