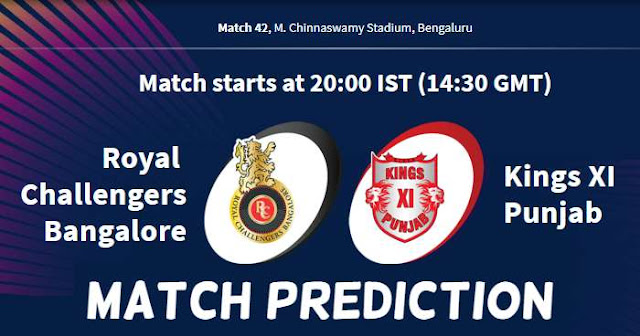 Better to chase because dew will be a factor later on in the night so the toss-winning captain would like to bowl first.

Royal Challengers Bangalore and Kings XI Punjab have played 10 matches against each other at M. Chinnaswamy Stadium, Bengaluru and both won 5 matches each.

Royal Challengers Bangalore kept their minuscule chances of progressing to the VIVO IPL 2019 Playoffs alive after they defeated table-toppers Chennai Super Kings by a solitary run in Match 39 played at the M Chinnaswamy Stadium in Bengaluru. After posting 161-7 batting first, the hosts restricted CSK to 160-8.

KXIP need to learn to stitch a series of wins. They’ve blown hot and cold and have not managed to win more than two matches on the bounce. A series of wins at this stage will also give them momentum as they build towards the next phase of the competition.

Ravichandran Ashwin has bowled 116 deliveries to Virat Kohli but has not been able to dismiss him even once. The Kings XI Punjab captain R Ashwin has won only 3 tosses in 10 matches in IPL 2019. Virat Kohli needs 67 runs to complete 4000 runs as captain in IPL.

Chris Gayle v Dale Steyn in T20s: Runs Scored – 56, Balls Bowled – 59, Dismissals – 2, Strike Rate – 94.91. Dale Steyn has gone wicketless in 10 of the 16 IPL matches he has played in Bangalore. Chris Gayle has scored 421 runs in nine matches this season; the last time he had scored as many runs (or more) in his first nine matches in a season was in 2013 when he amassed 708 runs for RCB.
In our prediction, Royal Challengers Bangalore are likely to win this match.