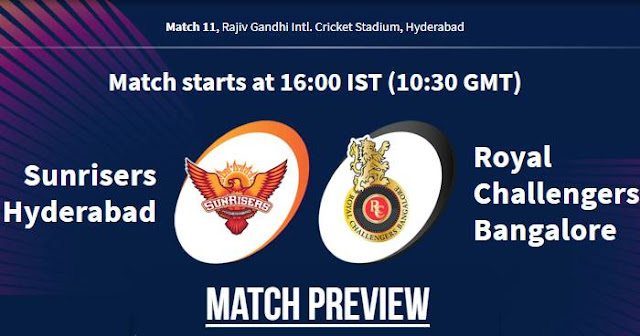 As far as weather is concerned, the temperature will be above 35°C during match hours.

Not a lot of fun as a fast bowler. There is a bit of grass, which means that there would be some skid, and then some turn later on in the day. The high scoring game will be seen today.

Sunrisers Hyderabad are coming with a win; registering their highest run-chase in the IPL against the Rajasthan Royals. After losing their opening match against Kolkata Knight Riders. While on the other hand, Royal Challengers are still looking for their first points of the season; losing their first 2 matches of the season.

The only change Sunrisers Hyderabad would like to make is to replace Shahbaz Nadeem by Mohammad Nabi.

After losing the two matches, Royal Challengers Bangalore may still play with the same combination.