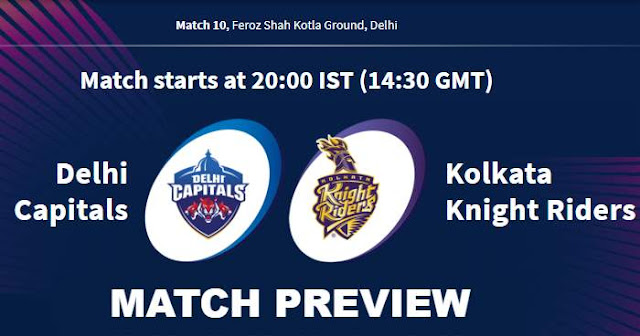 As far as weather is concerned, a shower with thunderstorm os forecasted in the afternoon. But the match seems to be away from any rains and also the temperature will be below 30°C during match hours.

This will be the second match at Feroz Shah Kotla, Delhi in IPL 2019. In the last match, played here between Delhi Daredevils and Chennai Super Kings it behaved as typical Feroz Shah Kotla’s pitch, slowed through the match. The match will be not a high scoring but it will be a perfect battle between bowlers and batsmen on this pitch.

The Delhi Capitals have won one win and one loss under their belt this season; losing their last match at Delhi against Chennai Super Kings. While Kolkata Knight Riders are undefeated this season of 2 played would like to continue this status.

All-rounder Chris Morris is available and should walk into the side at the expense of Keemo Paul. Delhi Capitals also have a foreign slot available; there is chance talk Trent Boult may be brought back in place of Amit Mishra or Rahul Tewatia.

Kolkata Knight Riders are no reason to change their winning playing XI.

Kolkata Knight Riders have 7 of the last 9 encounter against Delhi Capitals.

At Feroz Shah Kotla Ground, Delhi both team have played 8 matches against each other Delhi Capitals winning only 3 and Kolkata Knight Riders winning 5 matches.