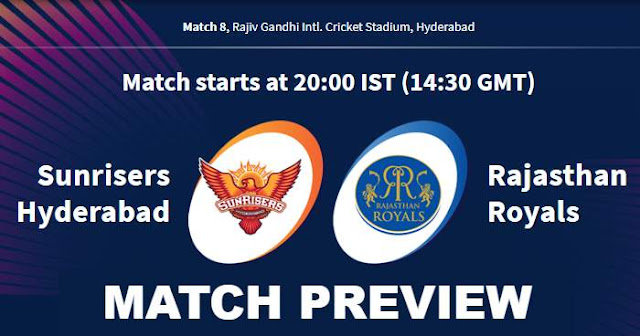 As far as weather is concerned, the temperature will be below 30°C during match hours with dew later in the match.

Hyderabad has predictably flat and dry pitch, with a tinge of grass to hold it together. Likely to slow up in the last few overs, so the slower ones at the death will be as useful as the foot-squashing yorkers.

Both teams are yet to open their account this season. Their opening games had seen a similar pattern. Having been in dominating positions for most parts of the match but lost grip on the contest and ended on the losing side.

Sunrisers Hyderabad will see the return of their skipper, who didn't play the last match due to shoulders injury have been recovered and will be available for selection. As a result, Jonny Bairstow could be dropped.

Rajasthan Royals are likely to play with the same side that took the field in the match against Kings XI Punjab.

With 9 games against each other Rajasthan Royals have won 4 matches and Sunrisers Hyderabad have won 5 matches.