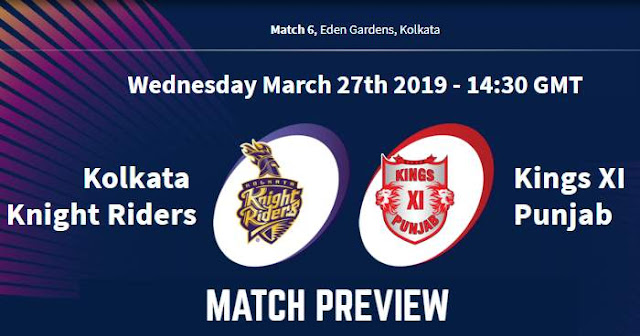 As far as weather is concerned, it will be a windy evening with humidity above 65% and the temperature around 27°C. On Tuesday there were little showers but rain will be away during match hours, but morning showers can be seen.

This wicket is a bit two-paced and spin will play a big part. You can expect there to be something for everyone. The new ball will move, spinners will get turn and there'll be runs in it for the batters too.

Both teams are coming with a win, having stolen victories from the jaws of their opponents in their opening match of the tournament; Kolkata Knight Riders beat Sunrisers Hyderabad and Kings XI Punjab beat Rajasthan Royals.

The good news for Kolkata Knight Riders is that Sunil Narine has healed and was bowling in the practice session. Narine injured his fingers during the match against SRH due to which he didn't open the innings with Nitis Rana. Kolkata Knight Riders are more likely to go with the same winning XI.

Sam Curran can be replaced by Andrew Tye due to the expensive overs in the last match. David Miller and Karun Nair are on the bench which can come in place of Nicholas Pooran and Manish Pandey.

At Eden Gardens, out of 10 matches between them, Kolkata Knight Riders have won 7 matches and Kings XI Punjab won only 3 matches including the last encounter between them in IPL 2018.