IPL 2018 Match 48 KXIP vs RCB Match Prediction, Preview and Head to Head: Who Will Win? 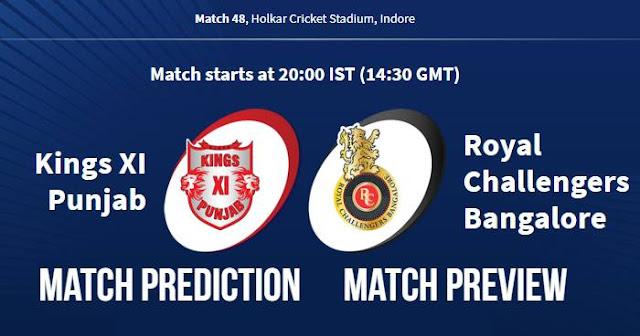 Kings XI Punjab (KXIP) and Royal Challengers Bangalore (RCB) will play the 48th match of Indian Premier League – IPL 2018 on Monday, 14th May at Holkar Cricket Stadium, Indore. As far as weather is forecasted, warm and dry day in Indore with the temperature hovering around 33ºC during match hours.

“There's a nice little coverage of green grass on the wicket. It's very dry in some areas and there is a bit of crack that might open up later. The white ball should carry and it'll spin a bit too. The average score is about 190 in IPL this year and the teams chasing have won most of the games.”

Kings XI Punjab are struggling with their middle order, they would like to bring David Miller in the middle strengthen it.

Royal Challengers Bangalore would like to remain to same winning playing XI who played against Delhi Daredevils.

Royal Challengers Bangalore and Kings XI Punjab have only played one matches against each other at Holkar Cricket Stadium, Indore in IPL 2017 which was won by Kings XI Punjab by 8 wickets.

First two matches had an average inning score of 163 but in the last match, both teams score 200+ runs and total 459 runs scored in the match which is second highest in the IPL history. Another 200+ match can be seen here.

Both teams are playing this match with one day gap after the match on Saturday. This will be the last match at Holkar Cricket Stadium, Indore in this season and also the last home match for Kings XI Punjab.

Kings XI are struggling in the second half of the tournament after winning 5 of the first 6 then losing 4 matches in next 5 matches. On the other hand, RCB cannot afford one more loss, and they need to win this to stay in contention for a playoff spot.
In our prediction, Kings Xi Punjab will win this match.