IPL 2018 Match 39 SRH vs RCB Match Prediction, Preview and Head to Head: Who Will Win? 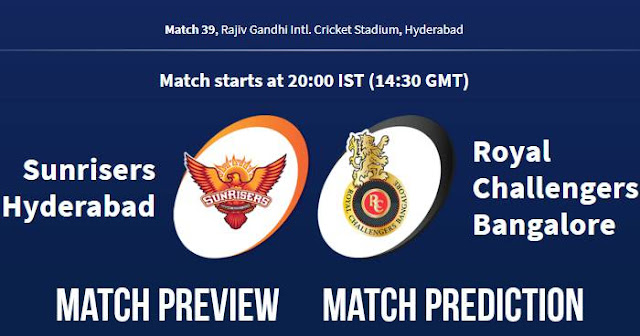 Sunrisers Hyderabad (SRH) and Kolkata Knight Riders (KKR) will play the 39th match of Indian Premier League (IPL 2018) on 7th May 2018 at Rajiv Gandhi International Cricket Stadium, Hyderabad. As was as the weather is considered, it will be a clear day with the temperature around 28ºC match hours.

Hyderabad Pitch has a bit of grass. In this season Hyderabad pitch has not been on the batting side; pitch is on the slower side. It is a 155-165 pitch, Sunrisers will be comfortably able to defend that.

Sunrisers Hyderabad have found their combination early in the tournament, despite several injuries they were able to find the best substitution. So they not like to make any changes to their current playing XI, which played against Delhi Daredevils.

The last match between them was abandoned without a ball being bowled due to rain in IPL 2017, prior to those Sunrisers won consecutive 3 matches against each other.

Doesn’t matter who bat or ball first in this condition but against Sunrisers Hyderabad it matters; Sunrisers Hyderabad are master of defending any total and at their home they are king. Both toss-winning captains will like to bat first if they win the toss.

Pitch is not a batting friendly and is on the slower side, spinners will be getting help. 170+ will be a par score on this wicket.

Royal Challengers Bangalore have to win each of the remaining 5 matches to have a chance to qualify for the playoffs; they are currently in no mistake zone.
In our prediction, Sunrisers Hyderabad will this match.