IPL 2018 Match 38 KXIP vs RR Match Prediction, Preview and Head to Head: Who Will Win? 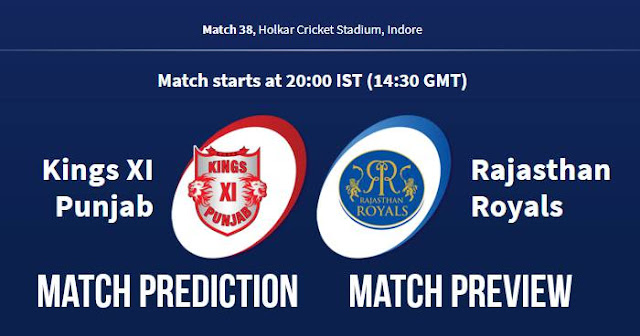 Kings XI Punjab (KXIP) will take on Rajasthan Royals (RR) in the 38th match of Indian Premier League – IPL 2018 on 6th May 2018 at Holkar Cricket Stadium, Indore. As far as weather is considered, the temperature will be around 35ºC to 30ºC during match hours.

This will be a home match for Kings XI Punjab and 2nd one at Holkar Cricket Stadium, Indore this season. Indore has a good batting wicket. In the last match between Kings XI, Punjab and Mumbai Indians Holkar’s pitch was little sticky. It has a green grass over it. Spinners will get help from the wickets while pacers will have to do a little more on this wicket.

Yuvraj Singh looks out of form and can again be replaced by Manoj Tiwary. Otherwise, they would like to play with the same XI players.

Rajasthan Royals would not like to tinker their playing XI as they have finally settled with their both bowling and batting unit.

Kings XI Punjab and Rajasthan Royals have never played against each other at Holkar Cricket Stadium, Indore.

Toss winning captain would like to chase here at Holkar Cricket Stadium, Indore.

The average scores here have been about 170 batting first. But looking at the condition and records of the previous few matches, 185+ will be a par score.

Rajasthan Royals are also coming with two successive losses and will be playing after the 6-day long break. They have to win the maximum of the remaining 6 matches out of which, 5 will play in the next 10 days.
In our prediction, Rajasthan Royals will win this match.