IPL 2018 Match 35 CSK vs RCB Match Prediction, Preview and Head to Head: Who Will Win? 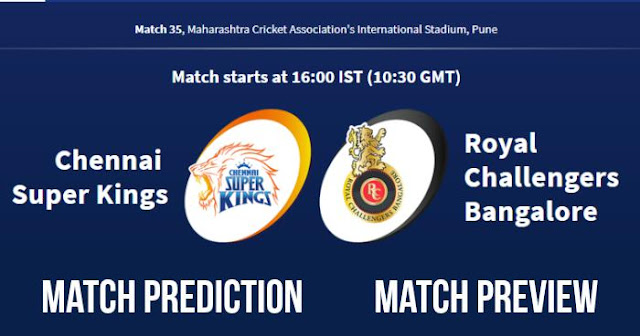 Chennai Super Kings (CSK) and Royal Challengers Bangalore (RCB) will play the 35th match of the 11th season of Indian Premier League (IPL 2018) on 5th May 2018 at Maharashtra Cricket Association’s International Stadium, Pune. As far as weather is concerned, it will be a hot day and be the day match this will be a tough condition for players. The temperature will be around 37ºC during the match hours.

Pune has a good batting pitch. Pune pitch has a nice covering of grass, which will hold the wicket together and help the ball carry through to the keeper nicely. It also offers spin. Toss winning captain is likely to bowl first on this wicket. Underneath the grass it's dry. It is a very good batting surface.

Chennai Super Kings looks settle and would not like to make any changes to the playing despite losing 2 matches in last 3.

Chennai Super Kings and Royal Challengers have never played any match against each other in Pune.

Looking at the records in this season in Pune, batting first will be a probable option.

Pune is a high scoring ground, 200+ score can be seen in this match looking at the batting line-up of both the team.

Chennai Super Kings have lost last 2 matches of the 3 will be a concern. In reviewing their performance in the previous match against Kolkata Knight Riders, the two-time champions CSK would have identified the lack of discipline in bowling and their sloppy fielding as areas to improve upon.