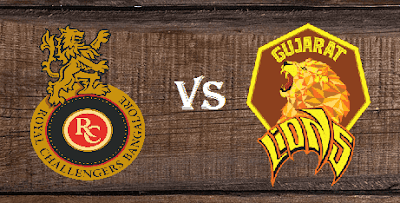 M. Chinnaswamy Stadium, Bangalore will host the 31st game of Indian Premier League 2017 played between Royal Challengers Bangalore (RCB) and Gujarat Lions (GL) on 27th April, 2017. Pitch report says that that wicket will support the bowlers and batsmen will have tough time because of crack; wicket is expected to be slow. Last game here on 25th was washed out due to rain even being a ball bowled.


Royal Challengers Bangalore gained 1 point in the last match due to match abandoned because of rain; RCB see this as lost of one point as they are at in bottom three of points table. Royal Challengers are struggling with batting despite of having strong batting unit; lack of consistent performance is the reason. AB de Villiers is in and out of the playing XI for RCB due to back problem. While RCB batting Innings in IPL 2017 had came against Gujarat Lions which will be positive for the RCB. While pitch being slow; Stuart Binny and Samuel Badree are probably to be in playing XI. And Yuzvendra Chahal is the most consistent bowler for RCB and will play the big role in the game.

Gujarat Lions is at the bottom of the points table with 4 points in the seven matches. Gujarat bowling is the problem and is inconsistent. Irfan Pathan will be joining their bowling department which will add some experience to it. While hint from Jason Roy of leaving in the mid due to not getting sufficient opportunity had added more problem to the team that is strolling to find the right combination.


Head to head: RCB vs GL

RCB had 3 wins and GL 2 win in 4 matches they had played so far. Last 3 are won by RCB. Last match they played in IPL 2017 was won by RCB in a high scoring game.

Toss: Gujarat Lions have won the toss and elected to bowl first

Man of the Match: Andrew Tye