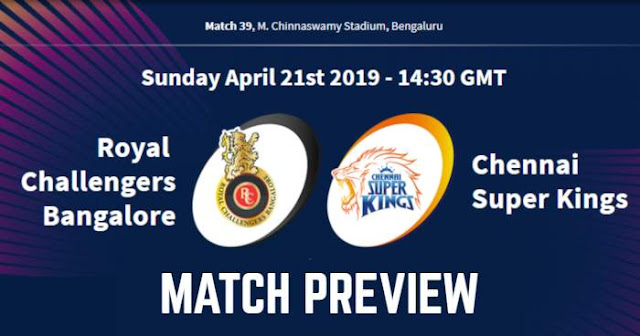 As far as weather is concerned, rain with thunderstorm is forecasted in the evening during match hours.

It looks a beautiful wicket to bat on. Nice even covering of grass. It is a six-hitting ground, the ball flies here. The average score here is 175-180 but this might be a 200+ pitch.

Royal Challengers Bangalore are at the bottom of the points table with 4 points, winning 2 of the 9 matches. On the other hand, Chennai Super Kings are table topper with 14 points in 9 matches; 7 wins and 2 loss.

There are chances that AB de Villiers will be playing as he missed the last match against Kolkata Knight Riders as told by RCB Chairman Sanjeev Churiwala. "He had a slight concussion due to which he was rested for the game against KKR. He is recovering well and we stay hopeful that he will be able to play against CSK," said Sanjeev Churiwala.

And as the changes for Royal Challengers is seen, Shivam Dube may be replacing Akshdeep Nath.

The decision for the playing of MS Dhoni and Dwayne Bravo will be made before the match as they missed the last match due to injuries. Other than that, Harbhajan Singh can make into playing XI in place of Karn Sharma for Chennai Super Kings.