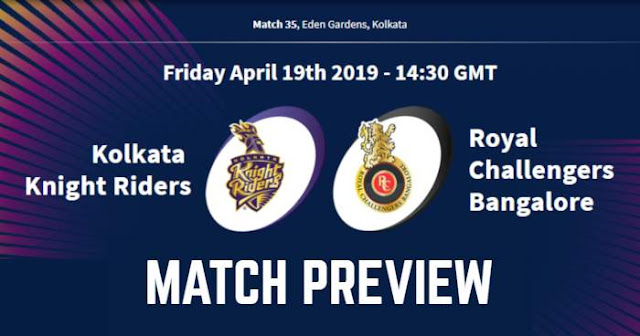 As far as weather is concerned, thunderstorms with rain are forecasted in the evening before the match hours.

This is probably one of the smallest grounds in IPL 2019, 9 runs an over is the average score on this pitch this season. The seamers can bowl around the good length area to make the most out of the conditions. It's a well-grassed track, hence there shouldn't be much spin on offer.

Kolkata Knight Riders are 6th on the points table with 8 points in 8 matches; 4 wins and 4 loss. On the other hand, Royal Challengers Bangalore have won only 1 match of 8 played and are on the 8th position with 2 points.

There is bad news for Kolkata Knight Riders, Andrew Russell is struggling with injury in his left shoulder and was not available for practice day before the match. Andrew Russell may be rested and Carlos Braithwaite will be fielded in.