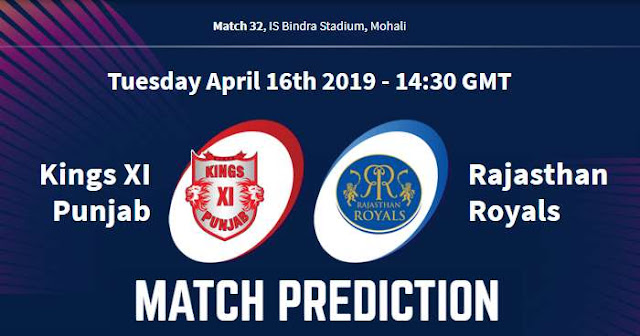 With rain forecasted, the toss-winning captain would like to chase to keep track of the Duckworth-Lewis method. And also 3 of the 4 matches played here this season are won by batting second.

The average score in the last five IPL games is 175. It looks good for batting. Little mosaic looking. It is a little bit challenging to hit sixes on this ground because of the dimensions. Anything above 180 will be par score at this ground.

Kings XI Punjab are coming with two consecutive loss against Mumbai Indians and Royal Challengers Bangalore and on the other hand, Rajasthan Royals are coming with a win.

Kings XI Punjab have a 3-1 win-loss record in matches at IS Bindra Stadium, Mohali in IPL 2019. The Rajasthan Royals captain Ajinkya Rahane has been very lucky at coin-tosses; he’s won 5 of the 7 tosses this season and Ravichandran Ashwin has won only 3 tosses in 8 matches. Jos Buttler has scored half-centuries in his last four innings against KXIP. Steve Smith and Chris Gayle have strike-rates of 94.25 and 96.22 respectively against spinners this season.
In our prediction, Rajasthan Royals are likely to win this match.

"Obviously you need to be in the crease. We've seen it even in the other games, everyone's having it in their minds. But these are small things and we'll have that in control," replied Shreyas Gopal when asked if the batsmen will be conscious of what happened at the non-striker's end in Rajasthan Royals' previous meeting against Kings XI Punjab.