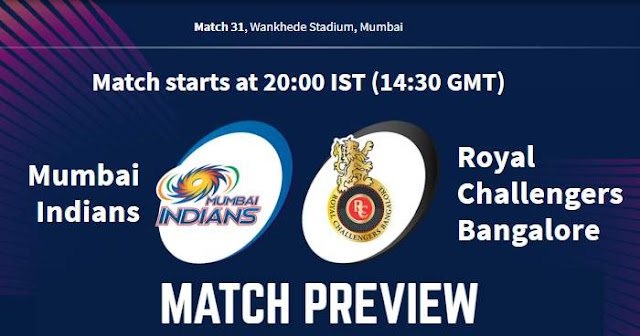 Mumbai Indians will take on Royal Challengers Bangalore in the 31st match of the 12th season of the Indian Premier League - IPL2019 on 15 April 2019 at Wankhede Stadium, Mumbai.

As far as weather is concerned, it will be warm and humid match hours with a temperature around 30°C and humidity above 70%.

It's been an absolute belter here this season. The pitch is so hard, lots of grass, it only adds to pace and bounce. Wankhede has a batting-friendly pitch. The ball will come on to the bat nicely, should be plenty of runs on this surface, a typical Wankhede pitch.

Mumbai Indians are forced to replace Alzarri Joseph who landed badly on his shoulder; Lasith Malinga will take his place.

Royal Challengers Bangalore have won their first game of the season and would not like to tinker their playing XI.