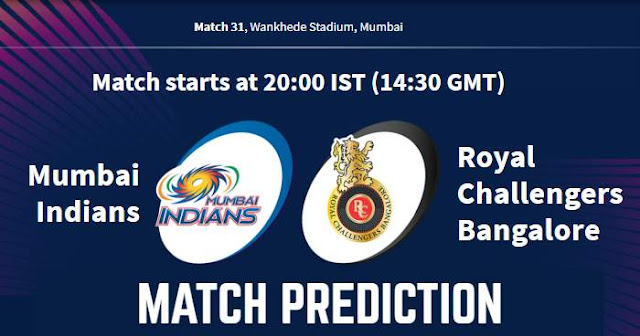 With dew coming later in the match, the team winning toss would like to chase here.

The average first innings total in the last 13 IPL matches at the Wankhede Stadium is 178 but 7 of 13 times it was chased down. Nothing less than 190 can be par score here.

Mumbai Indians are coming with a loss against Rajasthan Royals at their home after winning three consecutive matches. Royal Challengers Bangalore have won their first match after losing 6 matches in a streak.

The average first innings total in the last 13 IPL matches at the Wankhede Stadium is 178. Since 2016, Mumbai Indians have won six of the seven head to head contests against RCB, including all three at the Wankhede.

Pacers have taken 39 of the 48 wickets to have been picked up by bowlers in VIVO IPL 2019 matches at the Wankhede Stadium.

Rohit Sharma needs 40 runs to complete 8000 runs in T20 cricket. Rohit Sharma hasn't scored a fifty in his last 13 innings - the longest such sequence for him playing for MI and the second-longest in all IPL.

Jasprit Bumrah has taken more wickets against RCB than any other opposition - 16. He has dismissed both Kohli & de Villiers twice each
In our prediction, Mumbai Indians are likely to win this match.