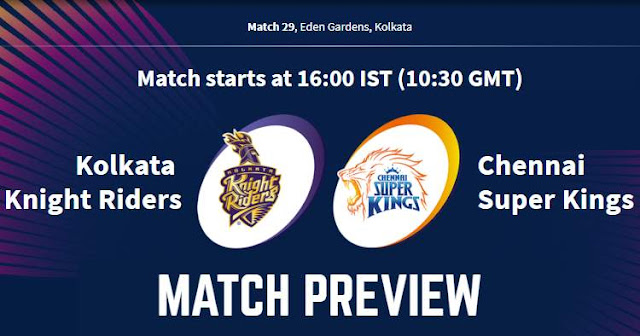 As far as weather is concerned it will be a very warm and humid day with match hours temperature around 35° and humidity above 60%.

This is probably one of the smallest grounds in IPL 2019, 9 runs an over is the average score on this pitch this season. The seamers can bowl around the good length area to make the most out of the conditions. It's a well-grassed track, hence there shouldn't be much spin on offer.

A few of the Kolkata Knight Riders’ players took flu and hence KKR couldn’t play with their first-choice XI in the previous match against Delhi Capitals. Both openers – Chris Lynn and Sunil Narine were ruled out of the last match; Chris Lynn due to flu and Sunil Narine minor hamstring. Though skipper Dinesh Karthik and Andre Russell played through; Dinesh Karthik is also having flu and Andre Russell is hurting from the strain he picked up against Chennai Super Kings in their previous encounter. The only probable change KKR is replacing Lockie Ferguson for Harry Gurney.

Chennai Super Kings (CSK) and Kolkata Knight Riders (KKR) have played 19 matches against each other and one match was abandoned due to rain in Indian Premier League (IPL).

In the only match in IPL 2019, Chennai Super Kings beat Kolkata Knight Riders by 7 wickets at home.

At Eden Gardens, Kolkata; Chennai Super Kings and Kolkata Knight Riders have played 8 matches against each other and had won 4 matches each..