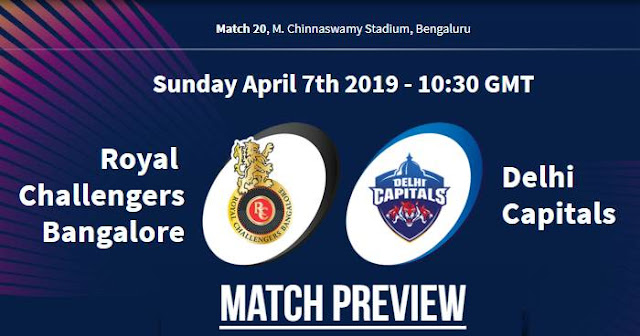 As far as weather is concerned, it will be a warm afternoon with the temperature around 35°C during match hours.

It looks a beautiful wicket to bat on. There is enough live grass on the wicket which suggests the ball will slide on. Occasionally, the ball might spin a little. It is a typical Chinnaswamy wicket which will have lots of runs. Nice even covering of grass. It is a six-hitting ground, the ball flies here.

The Royal Challengers, yet to register a win this season, are placed at the bottom on the points table; losses all 5 matches. On the other hand, Delhi Capitals had a great start in the tournament but they have lost last two matches and are 6th on the points table with 2 wins and 3 loss in 5 matches.

Royal Challengers Bangalore are clueless of what changes they had to make, probably they would be bringing Umesh Yadav in place of Mohammed Siraj.

Delhi Capitals are likely to go unchanged in this match.

Royal Challengers Bangalore (RCB) and Delhi Capitals (DD) have played 20 matches against each other in Indian Premier League (IPL) and one match was abandoned due to rain in 2015.