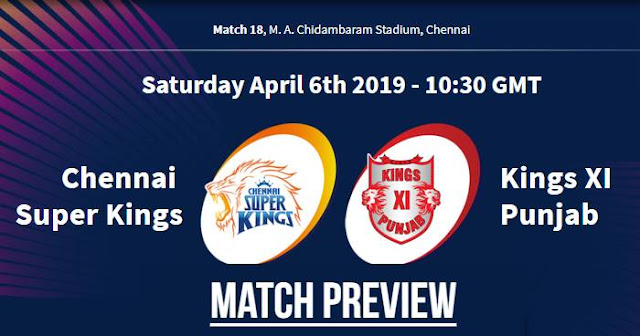 As far as the weather is concerned, it will be a hot and sunny afternoon with a temperature below 35°C. Wind will be felt around 16 km/h with humidity around 50%.

This pitch looks very dry and it might be helpful for the spinners. There is a small covering of grass but that is there to hold the wicket together. Average score batting first here is 167. The pitches used in the two matches played at the MA Chidambaram Stadium have behaved extremely differently. In the first match between CSK and RCB, spinners took 10 wickets and the quicks took 2 wickets. In the second match between CSK and RR, quicks took 11 wickets whereas the spinners took only 2 wickets.

In what comes as a big blow for Chennai Super Kings, Dwayne Bravo has been ruled out for two weeks with a Grade 1 hamstring tear. Possibly  Mitchell Santner will be replacing Bravo. Also, Harbhajan Singh might find a place in playing XI in place of Shradul Thakur.

Kings XI Punjab might not like to make any changes to playing XI but Chris Gayle will be brought back in place of Hardus Viljoen.

In last 5 matches between them, Chennai Super Kings have won 4 matches and Kings XI Punjab won only one match.