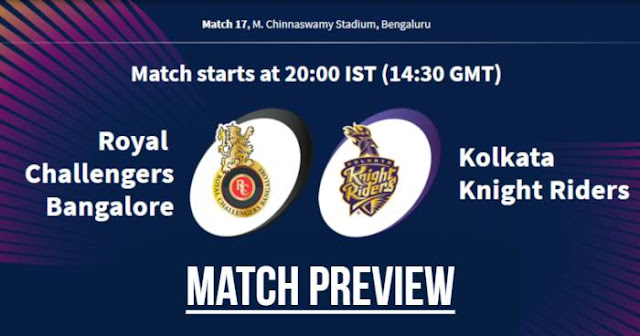 
As far as weather is concerned, the temperature will be below 30°C during the match hours and humidity above 40%.

There is enough live grass on the wicket which suggests the ball will slide on. Occasionally, the ball might spin a little. It is a typical Chinnaswamy wicket which will have lots of runs.

Royal Challengers Bangalore are yet to win a match this season, lost all the 4 matches played till know and are at the bottom of the points table with 0 points. On the other hand, Kolkata Knight Riders are in great form and had won 2 matches in the 3 matches that too in the super over.

Royal Challengers Bangalore are lacking strength in their bowling department, Tim Southee might replace Shimron Hetmyer and Mohammed Sirja may be replaced by Washington Sundar.

Sunil Narine missed the last match due to injury but according to sources is fit and ready to play and will be coming back in the place of Nikhil Naik.