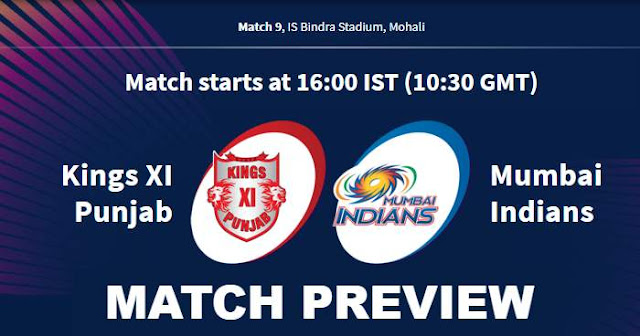 As far as weather is concerned, it will be unseasonably hot in the afternoon with the temperature at 36°C. Being the day match no dew factor.

The Mohali pitch will be nice and flat. And with heat baking it down, expect it to be hard, meaning it'll enable stroke-play.

Kings XI Punjab are coming with a loss after winning their first match. On the other hand, Mumbai Indians won their last match after losing their opening match.

Kings XI Punjab is missing their sixth bowler; Moises Henriques staying back in Australia to participate in the Sheffield Shield final. Apart from that, Hardus Viljoen can be replaced by Mujeeb Ur Rahman and Varun Chakravarthy can be replaced with Ankit Rajpoot.