IPL 2018 Qualifier 2 SRH vs KKR Match Prediction, Preview and Head to Head: Who Will Win? 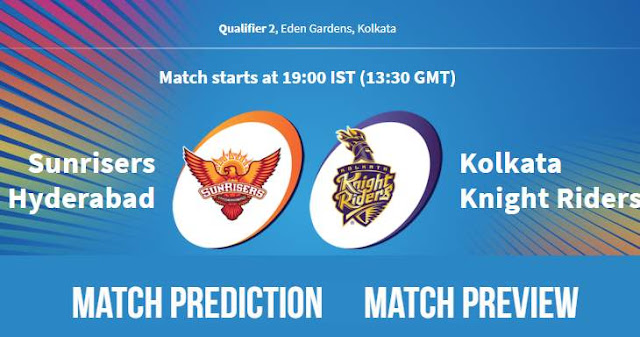 Sunrisers Hyderabad (SRH) and Kolkata Knight Riders (KKR) will play the Qualifier 2 of the 11th season of Indian Premier League – IPL 2018 on 25th May 2018 at Eden Gardens, Kolkata. As far as weather is concerned, no rain is forecasted with the temperature around 30ºC and humidity above 75% during match hours.

It is quite dry underneath but it's got a good covering of grass. Moisture on the pitch will be missing during this match as there has been no rain for two days. Spinners will still get the help from the pitch; also pace bowlers will get the help. It will be a good batting surface and both teams will score a lot of runs.

Sunrisers Hyderabad would like to play with the same XI, as tinkering at the last moment will not be a good choice.

Javon Searles may the player whom the team would like to replace, Tom Curran, Mitchell Johnson or South African all-rounder Cameron Delport are the options available. Cameron Delport will be not the best choice as he has not played any match this season and including in the team at the knockout stage will not be a good choice. The team may also play with the same winning XI.

Sunrisers Hyderabad have played 6 matches at IPL playoffs, out of which they won 3 matches.

Kolkata Knight Riders have played 9 matches at IPL Playoffs out of which they have won 6 matches and lost 3 matches.

The Kolkata Knight Riders are undefeated in the two IPL playoff matches they’ve played at the Eden Gardens, Kolkata. In 2014, KKR defeated Kings XI Punjab in Qualifier 1 and then in IPL 2018 they defeated the Rajasthan Royals in the Eliminator.

Toss will be an important factor; as dew will come into play later in the match, the toss-winning captain would like to bowl first.

180+ score match can be expected on this wicket; seeing both teams line-up, hard-hitting batsmen in both teams will make a high scoring match.

Our Prediction for IPL 2018 Qualifier 2 SRH vs KKR

Sunrisers Hyderabad have lost 4 matches in a row after ending at top of the IPL 2018 points table, this will a concern for them. In the 4 losses, first 3 matches were lost due to poor bowling performance which bowled at an economy with 9.00+ but the previous match against Chennai Super Kings in Qualifier 1 was lost due to crumbling batting.