IPL 2018 Match 53 RR vs RCB Match Prediction, Preview and Head to Head: Who Will Win? 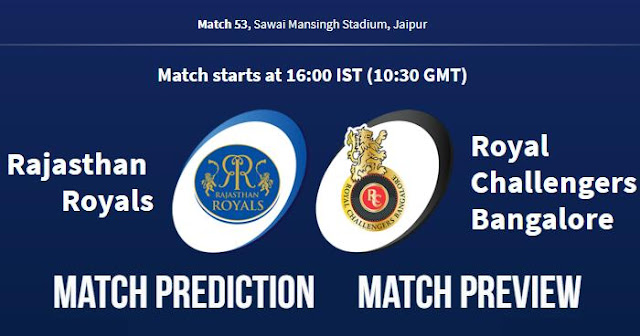 Rajasthan Royals (RR) and Royal Challengers Bangalore (RCB) will play the 53rd match of Indian Premier League – IPL 2018 on 19 May 2018 at Sawai Mansingh Stadium, Jaipur. This will be last league match for both teams. Hot and sunny day in Jaipur with the temperature reaching maximum to 42ºC at the start of the match.

There are cracks on the pitch and no grass at all. The surface will get slower as the match goes on. The captain will look to bat first and then use the spinners along with the long boundaries. 165 should be a par score.

Royal Challengers Bangalore would not like to tinker with their winning combination.

Rajasthan Royals and Royal Challengers Bangalore have played 16 matches against each other head to head in IPL and 2 matches abandoned due to rain. Out of 16 matches, both teams have won 8-8 matches each.

In last 5 matches with the results, Rajasthan Royals have won 3 matches and Royals Challengers Bangalore won only 2 matches. Last time they met was in IPL 2018, which was won by Rajasthan Royals.

Looking at the condition 175 will be a decent score on this pitch to defend.