IPL 2018 Match 51 RCB vs SRH Match Prediction, Preview and Head to Head: Who Will Win? 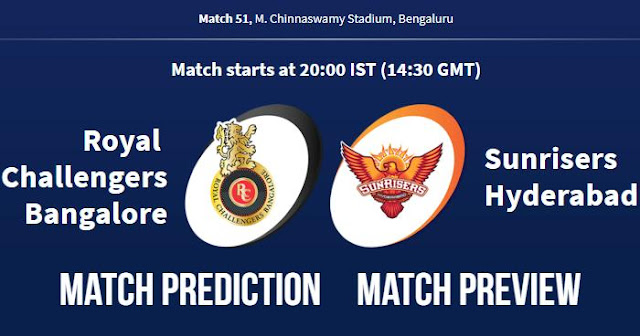 Sunrisers Hyderabad (SRH) will take on Royal Challengers Bangalore (RCB) in the 51st match of the Indian Premier League – IPL 2018 on 17 May at M. Chinnaswamy Stadium, Bengaluru.  As far as weather is concerned, rain is forecasted at 4 pm in the evening. Apart from that, the match will have the temperature around 25º.

Pitch looks batting friendly; dry and with a lot of cracks. Chinnaswamy pitch is bringing surprises in every match; Chinnaswamy pitch is taking a significant turn and helping spinners. The pitch is a bit slower to what was seen in previous matches. The ball is gripping, spinning and holding up on the pitch and definitely helping the spinners.

Royal Challengers are unlikely to tinker with their winning combination.

Yusuf Pathan and Wriddhiman Saha are suffering from soreness; both are likely to miss this match also after missing the last match against Chennai Super Kings.

4 matches out of 6 matches played at M. Chinnaswamy Stadium, Bengaluru is won by the team batting second.

Wicket will have the good turn, it will be difficult to play against spinners but 160+ score expected and par score will be 175+.

After 15 days IPL is returning to Bengaluru, this will be the last home match for Royal Challengers Bangalore. Royal Challengers looked one of the best team on paper at the start of the tournament and seemed that it will be one of the contenders for the trophy at the end but it looks like they are struggling to make into playoffs. RCB need to win their remaining two matches and wait for other match results according to their benefits to progress to playoffs.

Sunrisers Hyderabad, on the other hand, was the first team to qualify for playoffs which were followed by Chennai Super Kings.  Sunrisers have also confirmed in the top 2 at the points table; will get an extra chance to go into finals.
In our prediction, Sunrisers Hyderabad are going to win this match.