IPL 2018 Match 45 DD vs RCB Match Prediction, Preview and Head to Head: Who Will Win? 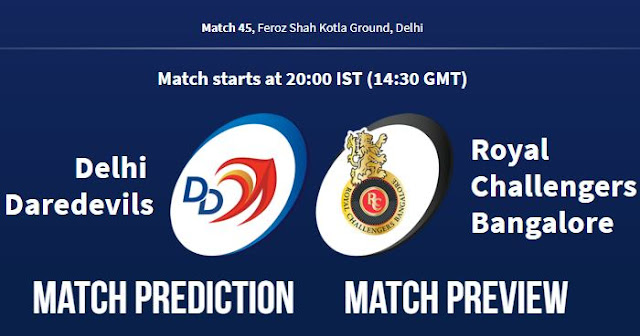 Delhi Daredevils (DD) and Royal Challengers Bangalore (RCB) will play the 45th match of the 11th season of Indian Premier League (IPL 2018) on 12th May at Feroz Shah Kotla, Delhi. As far as weather is considered, the day will be warm, with temperatures likely to hover around 43 degrees. No rain forecasted with the temperature around 34ºC during match hours.

Typical Delhi wicket with a lot of bare patches and less grass. It's been a bit lesser this season although some huge scores have been chased down. Tough to predict the pitch and it looked dry. It's sluggish, two-paced and also assisting the slow bowlers a lot. The pacers are also getting it to grip with their cutters.

Delhi Daredevils would stick to its same playing XI.

Royal Challengers Bangalore would also like to stick to their same playing XI.

Royal Challengers Bangalore have won last 4 matches played between them, including the last match in IPL 2018 on 21 April in Bengaluru which was won by  RCB by 6 wickets.

Sides batting first have won the 6 matches of the last 7 matches here. Last match here was won by Sunrisers Hyderabad by 9 wickets while chasing a target of 187 runs. Most probably toss winning team would like to bat first.

The average score here batting first has been about the 180-run mark; 190+ will be a par score on this wicket.

Delhi Daredevils have lost almost all the chances to playoffs; only one situation is left the to qualify is to win all the remaining 3 matches with a huge margin and also hope for other results to be in their favour.

Royal Challengers Bangalore need to win their remaining four matches to stay in contention and also hope for other results to be in their favour to qualify for the playoffs.
In our prediction, Delhi Daredevils will win this match.