IPL 2018 Match 44 KXIP vs KKR Match Prediction, Preview and Head to Head: Who Will Win? 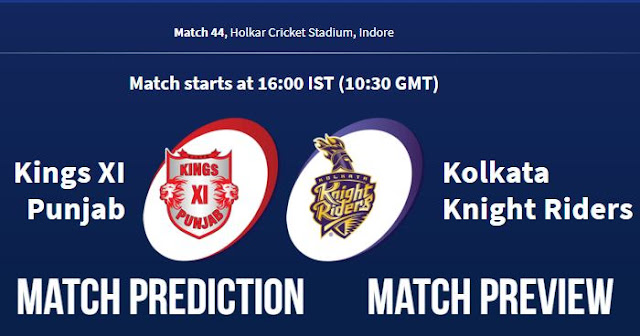 Kings XI Punjab (KXIP) will take on Kolkata Knight Riders (KKR) in the 44th match of Indian Premier League – IPL 2018 on 12th May at Holkar Cricket Stadium, Indore. A hot and dry day in Indore, players will have to play under the temperature of 40ºC as it is an evening game.

The pitch looks a good wicket to bat on but showing sluggish nature in this season of IPL. The average scores here have been about 170 batting first but in recent times spinners have enjoyed it a bit. Last two innings have an average first inning score of 163.

Despite losing the last match against Rajasthan Royal wouldn’t like to tinker their playing XI.

Shubman Gill who misses the last match against Mumbai Indians has recovered from injury and is fit to make a comeback in playing XI. There is still no information Shivam Mavi injury, he will be probably missing this match also.

Kings Xi Punjab have won last two matches after getting defeated in eight successive matches including the match in IPL 2018 at Eden Gardens, Kolkata which was won by Kings XI Punjab by 9 wickets.

Both matches played here at Holkar Cricket Stadium are won by the team chasing so toss-winning captain would like to chase also condition support this.

The two matches played here in this season had an average first inning score is 163, while Mumbai Indians had chased down 174 easily this season in 19 overs. 175+ will be par score looking to the playing condition.

On the other hand, Kolkata Knight Riders are also coming with a loss and have slipped in the bottom half of the points table after losing two consecutive matches against Mumbai Indians.
In our prediction Kings XI Punjab will win his match.