IPL 2018 Match 40 RR vs KXIP Match Prediction, Preview and Head to Head: Who Will Win? 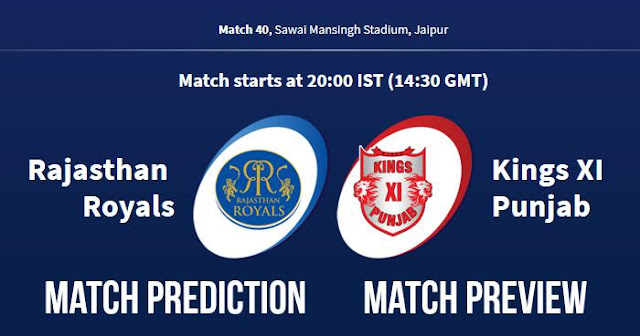 Rajasthan Royals (RR) will take on Kings XI Punjab in the 40th game of the Indian Premier League –IPL 2018. They are meeting again in less than 48 hours; met last on 6th may at Holkar Cricket Stadium, Indore and the match was won by Kings XI Punjab by 6 wickets. As far as weather is concerned, a strong thunderstorm is forecasted in the afternoon otherwise match hours is clear with the temperature around 30º.

Jaipur pitch has a couple of bald patches; spinners will not get much help but pacers will get help with the new ball. A decent covering of grass is there with some crack; crack might open later in the game.

Heinrich Klassen and Dhawal Kulkarni can make a comeback to the playing XI in place of D’Archy Short and Anureet Singh.

Kings XI Punjab are winning despite some flaws in the middle order but would like to continue with the same playing XI which played against Rajasthan Royals in the last match.

At Sawai Mansingh Stadium chasing is much easier under the lights despite the pitch not being batting friendly.

Rajasthan Royals have three wins from nine outings; given how the table is taking shape, they need to win each of their remaining matches to stand a chance of making the playoffs.

The time has come for the Kings XI Punjab to shift goalposts now; they are on the brink of qualifying for the Playoffs, and should now start aiming at a top-two finish – so they get the additional opportunity to progress to the Final.
In our prediction, Kings XI Punjab have more chance to win this match.