IPL 2018 Match 34 KXIP vs MI Match Prediction, Preview and Head to Head: Who Will Win? 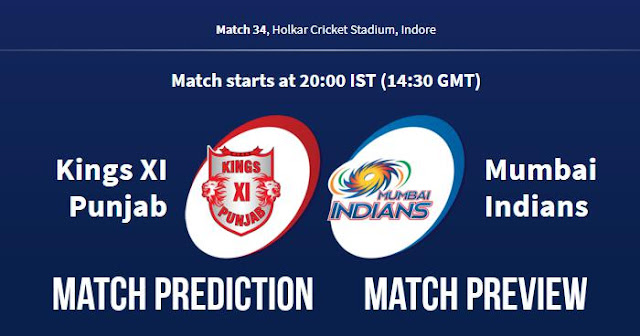 Kings XI Punjab (KXIP) and Mumbai Indians (MI) will play the 34th match of the 11th season of Indian Premier League (IPL 2018) on 4th May 2018 at Holkar Cricket Stadium, Indore. As far as weather is concerned, it will be a warm and dry day; the temperature will be above 30ºC during the match.

Holkar has a good batting wicket. Indore pitch is known for its high scoring match. Pitch has a decent grass covering with few cracks. Pitch is double-paced. Ball has been stopping a bit off the seamers as well; it helps for spinner also.

Kings XI Punjab have got a good rest and will be playing after a gap of a week. KXIP are unlikely to make any changes to their playing XI if they then most probably will replace Barinder Sran with Mohit Sharma.

Evin Lewis missed the last match against Royal Challengers Bangalore due to the wrist injury, till now there is no update about him for this match. If he is fit then he will be replacing Kieron Pollard.

Kings XI Punjab and Mumbai Indians have only played one match against each other at Holkar Stadium, Indore and which was won by Mumbai Indians by 8 wickets.

The average first innings total here is 147, the team that wins toss would be desperate to chase. The ground is relatively small with straight boundaries only 73 metres. On all 4 games played here, the team batting second has won.

Score here is unpredictable but it will be around 160. Average first innings total here is 147.

Mumbai Indians have very less chance of winning this match in front of Kings XI Punjab.

Toss: Mumbai Indians won by the toss and elected to bowl first.