IPL 2018 Match 33 KKR vs CSK Match Prediction, Preview and Head to Head: Who Will Win? 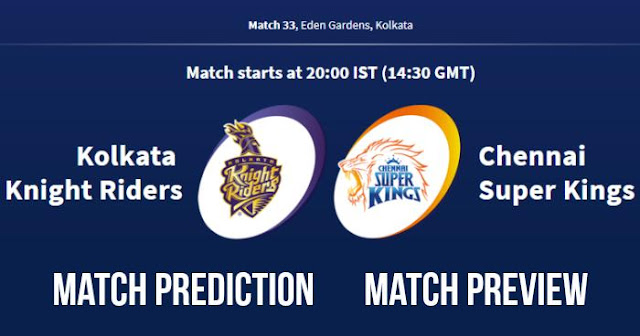 Chennai Super Kings (CSK) will take on Kolkata Knight Riders (KKR) on 3rd May 2018 in the 33rd match of Indian Premier League – IPL 2018 at Eden Gardens, Kolkata. As was far as weather is concerned, it’s a bad news; rain with the thunderstorm is forecasted throughout the day. There are maximum chances of a rain-curtailed match or no match. The last match also at Kolkata was also rain affected.

It is nice and hard, it's got good bounce wicket, with plenty of grass on the pitch to hold it together. A high scoring game can be seen if weather allow.

Nitish Rana may not play this match as he was down with a lower back spasm and retired hurt in the previous match. Nitish also skipped the evening training session. Kolkata Knight Riders have limited bench strength, if he is ruled out, then Shubham Gill can be promoted and bring in Rinku Singh or one of Ishank Jaggi or Apoorv Wankhade can get a chance in playing XI.

In the last match between them in IPL 2018, Chennai Super Kings defeated Kolkata Knight Riders by 5 wickets in Chennai.

Toss winning captain would like to chase on this wicket and also rain forecasted batting second have an advantage. 3 of the 4 matches played in Kolkata in IPL 2018 were won by batting second.

190+ will be a par score on this wicket. In last two matches at Eden Gardens, Kolkata 190+ runs were scored in first innings.

Chennai Super Kings are in the most comfortable state and in one of the best form. Their all guns are firing and their captain MS Dhoni is leading from the front.

On the other hand, with Delhi Daredevils and Royal Challengers Bangalore won their last matches, it has become tough to finish in the top 4. Kolkata Knight Riders have to win the maximum of their remaining matches.  Kolkata Knight Riders are performing on bits and pieces and also relying too much on Andre Russell to finish.
In our prediction, Chennai Super Kings have more chance of winning this match.

Toss: KKR won the toss and elected to field first.