IPL 2018 Match 31 RCB vs MI Match Prediction, Preview and Head to Head: Who Will Win? 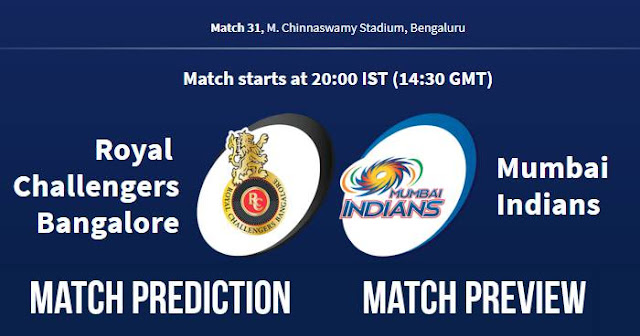 Royal Challengers Bangalore (RCB) and the defending champions Mumbai Indians (MI) will play the 31st match of the 11th season of Indian Premier League (IPL 2018) on 1st May 2018 at M. Chinnaswamy Stadium, Bengaluru. The temperature will be below 28ºC during the match hours with a little bit of humidity around 50%.

Chinnaswamy pitch is bringing surprises in every match; Chinnaswamy pitch was taking a significant turn in the last match between Royal Challengers Bangalore and Kolkata Knight Riders. The pitch is a bit slower to what was seen in previous matches. The ball is gripping, spinning and holding up on the pitch and definitely helping the spinners.

Both Royal Challengers Bangalore and Mumbai Indian have played 7 matches and are with 4 points at 7th and 6th position respectively; 2 wins and 5 losses each.

Mumbai Indians are coming with a win against the table topper Chennai Super Kings and are unlikely to tinker their playing XI.

4 of the 5 matches played at M. Chinnaswamy Stadium, Bengaluru played this season are won by chasing second. Any total is difficult to defend here defend due to short boundaries. So toss winning captain would like to chase here.

Looking to the slow and turning pitch 180 will be a good total to post but 195+ can be considered a par score here.

Three of the top four totals posted in IPL 2018 have been against Royal Challengers Bangalore. RCB has to stop the leaking runs and also fielding was crucial in the last match. On the other hand, Mumbai Indians would be confident after winning their last match against Chennai Super Kings. Also, Mumbai Indians got runs at the top order.
In our prediction, Mumbai Indians have more chance of winning this match by looking at their performance and the previous record.