IPL 2018 Final CSK vs SRH Match Prediction, Preview and Head to Head: Who Will Win? 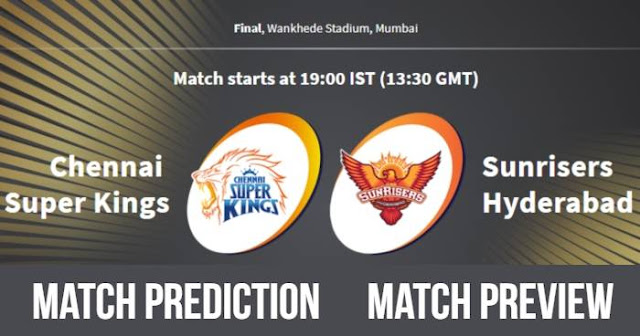 Finally, after 59 matches and 49 days, Chennai Super Kings (CSK) and Sunrisers Hyderabad (SRH) will be playing final of the 11th season of Indian Premier League - IPL 2018 Final on 27 May 2018 at Wankhede Stadium, Mumbai. A clear evening with the temperature around 30ºC and humidity above 70% is forecasted.

“There is a little bit of wear and tear around the good length area and the spinners will exploit that as the game goes on. There will be some help for the bowlers bowling with the new ball. It will be full of runs, but mind you, it will be on the slower side. The team that wins the toss will bowl first and they will want to have the target on their mind.”


In last match here at Wankhede was played between Chennai Super Kings and Sunrisers Hyderabad, and the spinner was getting a lot of help from the pitch. With the likes of Rashid Khan and Ravindra Jadeja, a show can be seen.

Chennai Super Kings are looking in great form and would like to tinker their playing XI.

Sunrisers Hyderabad will have to make a tough call; in the last match, they made three changes. Bringing Wriddhiman Saha paid off while K Khaleel Ahmed and Deepak Hooda brought in place of Sandeep Sharma and Manish Pandey was unable to inspire.

Chennai Super Kings have won 4 matches of the last 5 played between them, including 3 matches in this season.

Sunrisers Hyderabad have played 1 IPL Final and won in IPL 2016.

In 8 matches played at Wankhede Stadium, Mumbai; 4-4 matches are won by the team batting first and team batting second.

In 10 IPL Finals, the team batting first has won 7 times and team batting second have won 3 times only. In pressure like situation, the team would like to bat first.

Wankhede’s pitch has behaved both ways in this season; the high scoring game has been seen with game dominated by bowlers. Score around 160 will be the par score.

Our Prediction for IPL 2018 Final CSK vs SRH

Chennai Super Kings and Sunrisers Hyderabad are the last two teams standing in the competition, and they will vie to be crowned the VIVO IPL 2018 champions by winning IPL 2018 Grand Finale.

Check: Who Said What Before IPL 2018 Finale CSK vs SRH

Who is your favourite team in IPL 2018 Finale – Vote Now.
In our prediction, Chennai Super Kings are going to lift the IPL 2018 Title.