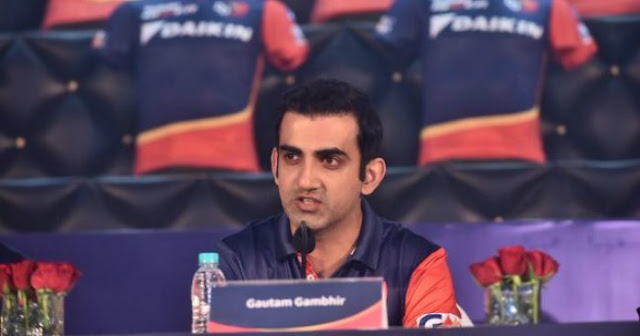 
Gautam Gambhir made this announcement today (25 Apri) during the media attraction before the next home match at Feroz Shah Kolta. Gautam Gambhir said,


I take full responsibility for the position we are in. And looking at the position, I have decided to step down as captain. Iyer will take over. I still feel we have the team to turn things around this IPL.


Absolutely my decision. I was the one who initiated the meeting (with the team owners). I thought that I haven't contributed enough and at the same time, the performance of the team... I had to take the responsibility being the leader of the ship. So I feel that it was the right time.


We're very much in this competition. It was absolutely my decision, no pressure from the franchise, they've been absolutely sportive about it, and sometimes when your conscience says it's the right time you just take that (call).


He also tweeted later on that this is my decision and it was his decision.


True, that I’ve stepped down from DD captaincy. Just to clarify it was my call, nothing from the management or coaching staff. I may not be leading from the front but I will be the last man standing for @DelhiDaredevils. No individual bigger than d team. Very much a #DilDIlli.


I just got the news today afternoon and I wasn't thinking much about it. I'm really loving the responsibility they've put upon me and also the faith they've shown upon me. I love facing challenges and it's a great opportunity for me to prove myself and get the team to the highest level possible.


I want to thank the management and my coaches for appointing me as the captain of the team. It is a great honour for me,

Ricky Ponting, Delhi Daredevils coach said on this that,


It's my job, it's Gautam's job and it's all the players' job to make Shreyas's job as easy as possible on the field. There are a couple of training days before the game comes around and it's our job as coaches to make sure they train hard and train well and are prepared for what's going to come in the game. A big part of coaching is to make sure that captain has got everything he needs to be well prepared for the challenge.


There's no extra pressure on Shreyas at all. He's going to play the way he's been playing. He's been playing terrifically well and that's what we want to create around our team. We want to have a nice and relaxed environment, sure things are getting tougher for us, but it's just a great challenge that we've got and with a new young captain, we're all excited to see how it works out for us in the next few weeks.


Ricky Ponting had himself stepped down as Mumbai Indians captain during mid-season of IPL 2013.

Hemant Dua, the CEO of Delhi Daredevils said in series of tweets that,


Dear All who support @DelhiDaredevils thru thick and thin let me start by first thanking you all! No one wants to loose and definitely not me! It hurts every time! We pick the best squad at auction and have got best coaches. We are just all better in hindsight.
I still think we have a great squad and can beat any team. However we need to click as a unit not just one department. I am confident still that we can turn around and bold decisions are around the corner. You saw a glimpse today with our improved bowling! We will go all out
Pleasr just stand by us as you have done for years. We are all distraught but am still optimistic. My heart beats for #Dilli and it will continue to do so! We will make an impact in next 8 games! #DilDill #VIVOIPL #DilliDhadkega zaroor!


Delhi Daredevils will play their next match on 30th April against Chennai Super Kings in Pune.