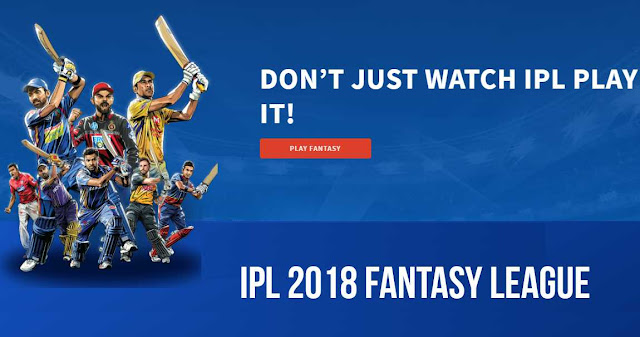 
IPL Fantasy league is an online game organised by Indian Premier League officially, where the users create a virtual team from the allocated point’s budget. And you will earn the points on the basis of the players of your choice performing in the actual matches. The team with the maximum points win.


How to create the account for IPL Fantasy League 2018?


How to create your squad or Squad Selection?

Initially, you will be provided with 10 Million Virtual Dollar to create a team of 11 players. (All players should be selected within the limit). Every real-world player playing in IPL 2018 will be available for selection with its own cost, IPL franchise, playing the role such as batsman, bowler, all-rounder or wicket-keeper and whether capped or uncapped by the national team.

Players can be changed before the scheduled time of the commencement of the match and one can change the team for every match.

The format of the IPL Fantasy League 2018

There are two formats of the IPL Fantasy League:

Fantasy Championship is played during the whole IPL tournament. The player performance will be calculated on the basis of points. And at the end of each match, every player's point will be summed to form the virtual team's points. At the end of the tournament, the virtual team with the maximum point will be the winner. In case of a tie, total points of the power play will be compared and team with the highest points will be declared the winner.

Restrictions on substitutions: In this format of the Game, users may substitute players within their virtual squads, within the constraints set out above, as follows:

In Daily Challenge users will be allowed to create a virtual team from the players participating in a particular match played during a single day and compete against the teams of all other users on that same day. Points will be calculated on the basis of the points scored by all the players of the team. Virtual team with maximum points at the end of each day will be the winner.

2. Strike Rate Bonus ( applicable only is player score more than 10 runs)
3. 10 Points For Scoring each 25 Runs

2. Economy Rate Points ( only for player with minimum one complete over)


3. 10 Points every wicket after the first wicket

5. 20 Points for Each Maiden Over Bowled

Prize details will be announced later.