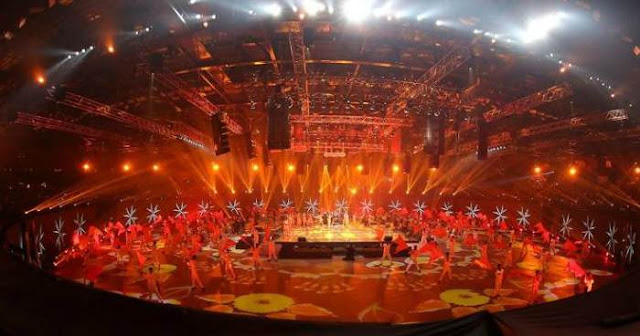 19:56 IST: Bollywood actor Hrithik Roshan comes on the stage for the final act of the IPL 2018 opening ceremony. He is the last one to perform.

18:55 IST: Jacqueline Fernandez is showing some impressive dance moves by the actress.

18:51 IST: And here is Bollywood actress Jacqueline Fernandez, the next performer at the IPL 2018 opening ceremony.


18:47 IST: Mika Singh is entertaining the crowd with some of his popular Bollywood songs. The IPL 2018 opening ceremony has been entertaining and magnificent so far.

18:37 IST: Now Tamannaah Bhatia is performing on the Baahubali song.

18:34 IST: "All the three titles we won was for this wonderful crowd. We will again try our best to bring this cup back. We know it won't be easy", says Mumabi Indians captain Rohit Sharma.


We've won all the three titles for this wonderful crowd here. Looking forward to starting this tournament on a good note - @mipaltan Captain @ImRo45 ahead of tonight's opening game. pic.twitter.com/peSEb4422G
— IndianPremierLeague (@IPL) 7 April 2018

18:33 IST: Mumbai Indians captain Rohit Sharma is there on the stage now. He is out there in the middle with the trophy.

18:32 IST: All the eight team captains have taken a pledge so that the spirit of the game remains intact.

The eight captains sign the Spirit of Cricket pledge as the VIVO #IPL commences in Mumbai. pic.twitter.com/YvLJNXtfZb
— IndianPremierLeague (@IPL) 7 April 2018

18:27 IST: Bollywood dancing legend Prabhu Deva is next to perform with Varun Dhawan. Can’t get any better!

18:18 IST: Bollywood actor Varun Dhawan is the first to perform at the ceremony.

18:12 IST: Hello and welcome to the live updates of the IPL -11 opening ceremony. The ceremony will begin in some time.

The 11th season of Indian Premier League (IPL 2018) is beginning tonight with a star-studded opening ceremony. Fans can expect a glitzy and glamorous affair in the opening event. The opening ceremony will be followed by the opening match of the season between Mumbai Indians and Chennai Super Kings (MI vs CSK) at 8:00 pm (IST).