IPL 2018 Match 5 CSK vs KKR: Preview, Prediction and Head to Head: Who Will Win? 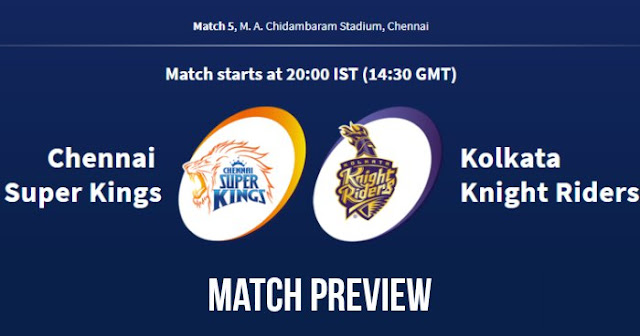 Chennai Super Kings (CSK) and Kolkata Knight Riders (KKR) will play the 5th match of the 11th season of Indian Premier League (IPL 2018) at M.A. Chidambaram Stadium, Chennai on 10th April 2018. As far as weather is considered, Clear skies have been forecast while the temperatures will be around the 30ºC mark but real feel will be around 35ºC with a high humidity of 79-82%.


After two years Chepauk will be coloured yellow. M.A. Chidambaram Stadium’s pitch is a bowling friendly, helping more in the second innings. While average runs are around 160 but have also seen 200+ inning score. Most probably team batting first wins here, in IPL 2015 CSK won 6 of 7 matches played here while batting first in all the inning.

Both teams are coming with the win in their first match of the season. Chennai Super Kings won the opening match of the tournament against Mumbai Indians at their home which was a nail-biting one. On the other hand, Kolkata Knight Riders beat Royal Challengers Bangalore at home.

KKR pace attack was struggling against RCB in the last match, mainly Vinay Kumar and Kuldeep Yadav. With 19 man squad KKR doesn’t have many options for replacement, KKR may replace Kuldeep Yadav with Kamlesh Nagarkoti.

Chennai Super Kings and Kolkata Knight Riders had played 17 matches against each other in IPL out of which CSK won 10 of them and KKR won 6; one match abandoned due to rain in Cape Town.
At M.A. Chidambaram Stadium, Chennai, famously known as Chepauk Stadium, of 7 matches played CSK had won 5 of them and KKR won only two.