IPL 2018 Match 26 DD vs KKR Match Prediction, Preview and Head to Head: Who Will Win? 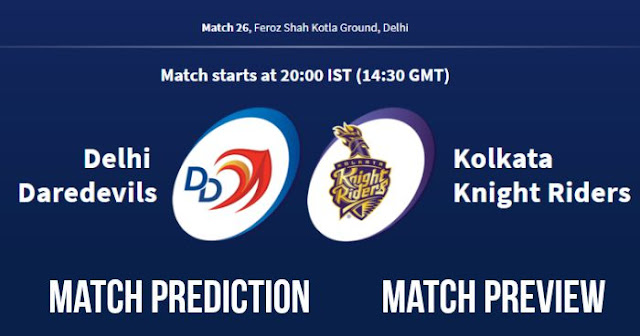 Kolkata Knight Riders (KKR) will take on Delhi Daredevils (DD) in the 26th match of Indian Premier League – IPL 2018 on 27th April 2018. This is the second encounter between them in this season; last time they met on 16 April in Kolkata where Kolkata Knight Riders won by 71 runs. As far as weather is considered it will be a hot day with daytime temperature touching to 42ºC but match hours will see the temperature below 35ºC.

This will be the second match at Feroz Shah Kotla, Delhi in IPL 2018. In the last match, played here between Delhi Daredevils and Kings XI Punjab it behaved as typical Feroz Shah Kotla’s pitch, slowed through the match. The match will be not a high scoring but it will be a perfect battle between bowlers and batsmen on this pitch.

Delhi Daredevils are at the bottom of the IPL 2018 points table with 2 points, winning 1 match in 6 played. On the other hand, Kolkata Knight Riders are at the 4th position in 6 matches with 6 points; 3 wins and 3 losses.

Kolkata Knight Riders would like to play with their last playing XI, but Andre Russell who got right hamstring injury during the match against Kings XI Punjab may get a rest.

With the pitch getting slow as the game progress toss-winning captain would like to bat first. Spinners will be crucial on this wicket.

On this typical Feroz Shah Kotla wicket, 150+ is a par score. But scoring 140+ in the first inning will be a challenge.

In our Prediction with the current form of Delhi Daredevils as they are not able to perform as a steam and struggling; Kolkata Knight Riders have higher chance of winning this match.