IPL 2018 Match 24 RCB vs CSK Match Prediction, Preview and Head to Head: Who Will Win? 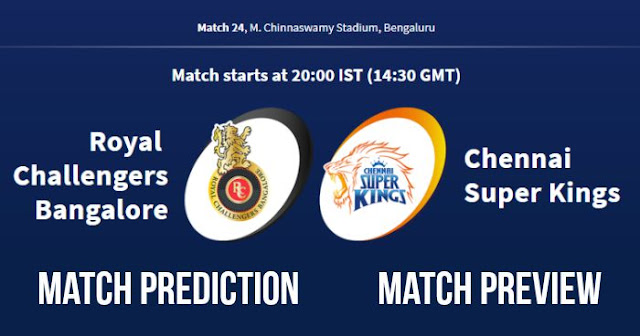 Royal Challengers Bangalore (RCB) will take on Chennai Super Kings (CSK) in the 24th match Indian Premier League - IPL 2018 on 25th April 2018 at M Chinnaswamy Stadium, Bengaluru. As far as weather is concerned, a thunderstorm with some rain is forecasted before the match, unlikely the effect the match.

As far as Chinnaswamy pitch is concerned, it is improved than last year. It is wicket with 190+ as par score. In the last match, Delhi Daredevils posted 174 for RCB to chase, which they did in 18 overs.

Royal Challengers Bangalore are coming with the win and are unlikely to make changes to their playing XI.

Imran Tahir is fit to play matches and will be included into playing XI in place of Sam Billing or Fad du Plessis; there are more chances that Sam Billing will have to sit on the bench as the team has Watson and Bravo as an extra bowling option.

If records between Chennai Super Kings and Royal Challengers Bangalore are to be talked at M. Chinnaswamy Stadium, Bangalore than they have played 7 matches against each other with both winning one match each and 1 ending in a no result match.

Chennai Super Kings are in defeated in last 4 matches played between them.

The team winning toss would mostly like to bowl first as with dew point at 18º, dew will be seen in later half of the match.

190+ will be a par score on this wicket.  In the last match against Delhi Daredevils, Royal Challengers Bangalore chased 174 easily in 18 overs.

MS Dhoni has a good record at M. Chinnaswamy Stadium, Bengaluru in IP; scoring 309 runs at an average of 61.08 and strike rate of 177.58 in 8 innings. Virat Kohli will be the 3rd Indian skipper after MS Dhoni (244) and Gautam Gambhir (170) to captain a T20 team in 100 matches or more. Also, Virat Kohli is 18 short of 2000 runs at M. Chinnaswamy.
With the current form of Chennai Super Kings, CSK have an upper hand in this match and are more likely to win this match.