IPL 2018 Match 22 DD vs KXIP Match Prediction, Preview and Head to Head: Who Will Win? 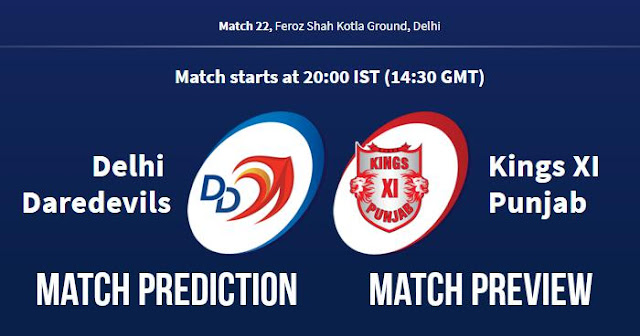 Delhi Daredevils (DD) and Kings XI Punjab (KXIP) will play the 22nd match of the 11th season of Indian Premier League (IPL 2018) on Monday 23rd April 2018 at Feroz Shah Kotla, Delhi. This will be the second time they will be meeting in IPL 2018; last they met on April 8 in Mohali where Kings XI Punjab beat Delhi Daredevils by 6 wickets. The temperature will be at 38ºC during the day, but the match hours will see a temperature below 30ºC.

This will be the first match to be played at Feroz Shah Kotla, Delhi in this season of IPL so pitch is still a mystery for this season. But Feroz Shah Kotla is known for its slow pitch with providing assistance to spinners. But last year, the pitch was batting friendly in first 3-4 matches at the start of the season.

Delhi Daredevils are struggling with batting as well as bowling department, while bowling department is on the worst side compared to Batting. Batsmen have performed in bits and pieces and also some individual performance. Mohammed Shami may return to playing XI in place of Harshal Patel.

Axar Patel has missed last three matches due to left thigh strain and there is no much sign of him retaining to playing XI. Kings XI Punjab may be playing with the same current playing XI.

Delhi wickets get slower as the match progresses, most suitable for bowlers. So most probably team winning the toss will like to bat first.

Pitch is still a mystery and unknown to us, but a score above 180 will be good looking to the track record. With Chris Gayle and KL Rahul at the top for Kings XI Punjab, they have another chance of scoring 200+.

Delhi Daredevils are struggling to find a momentum, this will be their first home gain and will like to capsulate more here. As later of 8 matches remaining for Delhi Daredevils, 6 are to be played at Feroz Shah Kotla. If they make their home a winning ground they may be in top four to qualify for playoffs.
In our prediction Kings XI Punjab have more chance of winning this match.