IPL 2018 Match 19 RCB vs DD Match Prediction, Preview and Head to Head: Who Will Win? 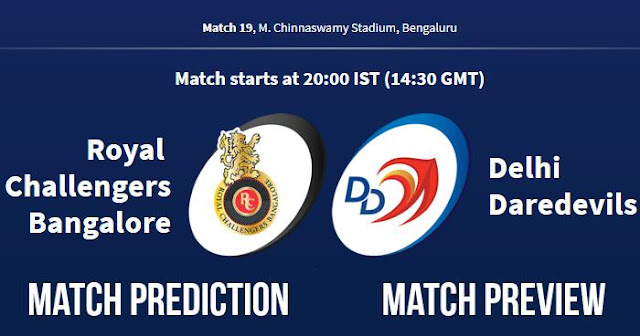 Royal Challengers Bangalore (RCB) will take on Delhi Daredevils (DD) in the 19th match of Indian Premier League – IPL 2018 on 21st April at M. Chinnaswamy Stadium, Bengaluru. As far as weather is concerned, afternoon rain is forecasted but there are little chances of rain during the match. After the rain temperature will not be a concern but later in the game humidity will be a factor to consider. Dew will come in to play and the toss-winning captain would like to bowl first.

Chinnaswamy pitch has been back to what was in 2016; in 2017 it was slow and sluggish; hard to score runs which were a weak point for batting heavy Royal Challengers Bangalore. Bengaluru wicket has cracks; a high scoring game can be seen as the last one between Rajasthan Royals and Royal Challengers Bangalore. Par score cannot be predicted here as anything above 200 can also be chased here.

Both Royal Challengers Bangalore and Delhi Daredevils are the bottom two teams on the points table; RCB at 7 and DD at 8. Both have played 4 matches and have 2 points each (1 win and 3 losses).

From last two matches, Royal Challengers Bangalore’s bowlers are giving away 200+ runs, this is bringing all the pressure on the batting. Virat Kohli is not able to shuffle his bowlers and RCB is still struggling to find the right bowling combination. Again possibly Pawan Negi can be brought back in place of Sarfaraz Khan.

Delhi Daredevils are also not having a good time with the ball; only Rahul Tewatia is consistent and rest of the bowlers is on and off. DD batting is struggling to build up any partnership; frequent fall of wickets is a concern. Gurkeerat Singh Mann can be brought in the playing XI in place of Vijay Shekhar who is not looking in the good touch.

If Royal Challengers Bangalore win the toss they are most likely to put Delhi Daredevils to bat first. On the other hand, Delhi Daredevils will also like to chase after analysing how the Chinnaswamy pitch behaves.