IPL 2018 Match 18 KKR vs KXIP Match Prediction, Preview and Head to Head: Who Will Win? 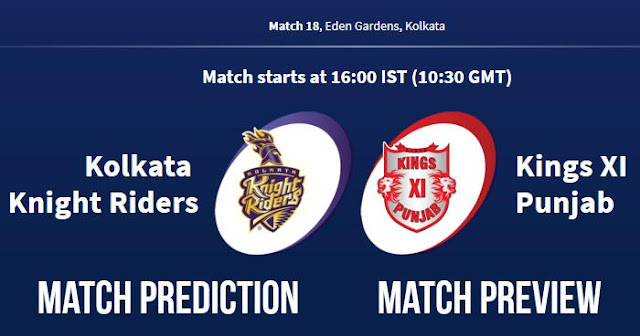 Kolkata Knight Riders (KKR) and Kings XI Punjab (KXIP) will play the 18th match of the 11th season of Indian Premier League (IPL 2018) at Eden Gardens, Kolkata on 21st April. Weather is not good for the day; with Norwesters, local rainfall and thunderstorm passed a few days ago. With rain forecasted every day for a week, today it has 60% chance rain with high humidity during the match hours.

Eden Gardens pitch has some grass. Kolkata wicket will get some movement for pacers and also it has something for the spinner, Sunil Narine will again be key bowler here. While batsman will get the ball on the bat; 160+ will be a par score.

Kolkata Knight Riders are coming with two wins with the same playing XI and will not like to tinker with its winning team combination.

Chris Gayle was the winning element for Kings XI Punjab in last two matches and has secured the place in playing XI after sitting on the bench for first two matches.

In this season of IPL, toss-winning captain have mostly chosen to field first. In this match, Kolkata Knight Riders may win the toss.

With the line-up Kings XI Punjab are having if they are batting first then they will score more runs as compared to Kolkata Knight Riders.

Kolkata Knight Riders have the strong record against Kings XI Punjab in IPL and this record also improves at Eden Gardens. But this time Kings XI Punjab have Chris Gayle on their side, who is destructive against Kolkata Knight Riders but it will be interesting this battle. But this battle will have another interesting angle when Sunil Narine comes in; against Sunil Narine, Chris Gayle has score 45 runs in 40 ball and have been out two times.
In our Prediction Kings XI Punjab have more chance to win this match.