IPL 2018 Match 16 KXIP vs SRH Match Prediction, Preview and Head to Head: Who Will Win? 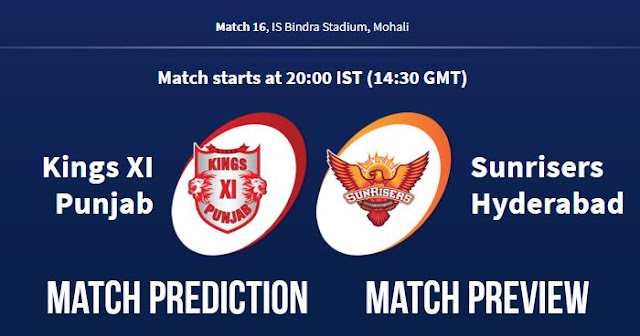 Kings XI Punjab (KXIP) and Sunrisers Hyderabad (SRH) will play the 16th match of the 11th season of Indian Premier League (IPL 2018) on 19th April 2018 at IS Bindra Punjab Cricket Association Stadium, Mohali. Weather forecasted to be hot with the temperature around 30ºC during match hours.

Mohali pitch is a hard and flat wicket; a batting-friendly pitch, a high scoring game can be seen as the last match. Pitch also has even grass covering. This match can see a 200+ score with this kind of pitch and the batting line-up both teams has.

Kings XI Punjab have won both the match at IS Bindra Stadium this season. Axar Patel is suffering from the thigh strain and will be missing this match. Most probably Kings XI Punjab will be going with the same playing XI.

Sunrisers Hyderabad are having 100% record in this season in three matches and are likely to play with the same playing XI.

And at Mohali Sunrisers are undefeated by Kings XI Punjab; Sunrisers Hyderabad won all the four matches played between them at Mohali.

Sunrisers Hyderabad are looking the strongest team in this season of IPL, in both department batting and bowling. They have five specialist bowlers and don’t require any extra bowler to complete the overs. In our prediction, with the batting line-up, Sunrisers are going to 200+ at Mohali and their bowlers are capable to defend this total.

Kings XI Punjab will have to take early wickets to win this match and also their lower middle order is a bit of concern.