IPL 2018 Match 15 RR vs KKR Match Prediction, Preview and Head to Head: Who Will Win? 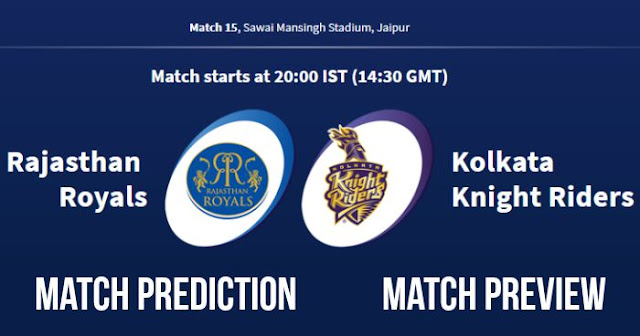 Rajasthan Royal (RR) and Kolkata Knight Riders (KKR) will play the 15th match of Indian Premier League – IPL 2018 on 18th April 2018 at Sawai Mansingh Stadium, Jaipur. Matchday will see a high temperature as 40ºC but the temperature will drop to 30ºC during match hours.  This will be the second match of the season at Jaipur; the first match was rain-curtailed while this match will not have any rain forecasted.

The Jaipur pitch has a bit of green grass and the wicket has got hardness; green grass will help the ball to carry through. Pace bowler will get movement of the pitch. In the last match, Trent Boult was getting movement and the pitch was helping him. Where the bowlers are pitching the ball will be crucial at this wicket.

After scoring 217/4 against Royal Challengers Bangalore in their last match and defending it; Rajasthan Royals are not likely to make any changes in their team.

Kolkata Knight Riders will also unlikely to make changes in their playing XI after winning with the same team against Delhi Daredevils.

Both Rajasthan Royals and Kolkata Knight Riders are struggling with one of their openers; D Arcy Short for RR and Chris Lynn for KKR. Teams are more dependent on their middle order. Both teams have depth in their batting with hard-hitting batsmen at the bottom. The real nettle will be fought by the bowlers.

Our match prediction for RR vs KKR is that Rajasthan Royals as they have the stronghold at their home ground and have not lost last nine matches at Sawai Mansingh Stadium and also they have won 9 out of 15 matches against Kolkata Knight Riders.