IPL 2018 Match 14 MI vs RCB Match Prediction, Preview and Head to Head: Who Will Win? 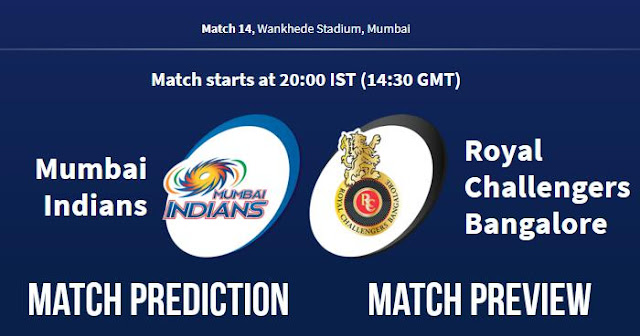 Mumbai Indians (MI) will be facing Royal Challengers Bangalore (RCB) in the 14th match of the 11th season of Indian Premier League (IPL 2018) at Wankhede Stadium, Mumbai on 17th April 2018. Match hours will see a temperature below 30ºC after a hot day with the temperature above 35ºC.

Wankhede pitch has a fair bit of even grass covering. Seam bowlers will get the movement off the pitch as well as in the air. The ball will come nicely on to the bat; a high scoring match can be seen.

Mumbai Indians were not able to defend 194 against Delhi Daredevils at Wankhede, surely their bowling line-up is not looking in good shape. Mitchell McClenaghan can comeback in playing XI in place of Akila Dananjaya.

Toss will be crucial, the team will like to chase on Wankhede pitch. Prediction can’t be easy in this game; two batting heavy team with struggling bowlers.

Our prediction is that Royal Challengers Bangalore have more chances of winning this match.

Mumbai Indians are undefeated by Royal Challengers Bangalore in last two seasons (IPL 2016 and IPL 2018) with four matches played between them in two seasons.

At Wankhede Stadium, Mumbai Indians and Royal Challengers Bangalore had played 7 matches out of which MI had won 4 matches and RCB won only 3 matches.