IPL 2018 Match 12 KXIP vs CSK Match Prediction, Preview and Head to Head: Who Will Win? 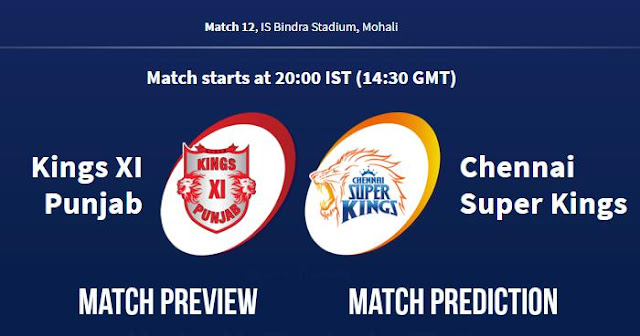 Chennai Super Kings (CSK) will take on Kings XI Punjab (KXIP) in the 12th match of the 11th season of Indian Premier League (IPL 2018) on 15th April at their home, I.S. Bindra Punjab Cricket Association Stadium, Mohali. The temperature will be around 25ºC at the start of the match but will rise sharply during the match.

Mohali pitch will be nice and flat. The pitch seems to be a very good one with even grass covering. The pitch here usually gets better in the second half to bat in day games but in evening match dew will be a factor to also be considered so, batting second will be the best option for the team winning toss.

KL Rahul, Karun Nair and Mujeeb Ur Rahman have performed in both the matches. Kings XI can make couple of replacement or may go with same playing XI which was against Royal Challengers Bangalore on Saturday.

Chennai Super Kings are going through lot of team restructuring this season. Kedar Jadhav is ruled out of the rest of season due to injury, Suresh Raina is going to miss this match plus one due to calf injury and also Luni Ngidi has flown back to South Africa following the demise of his father. Murali Vijay will be joining team in playing XI and may open which will push Ambati Rayudu to third place.