IPL 2018 Match 11 RCB vs RR Match Prediction, Preview and Head to Head: Who Will Win? 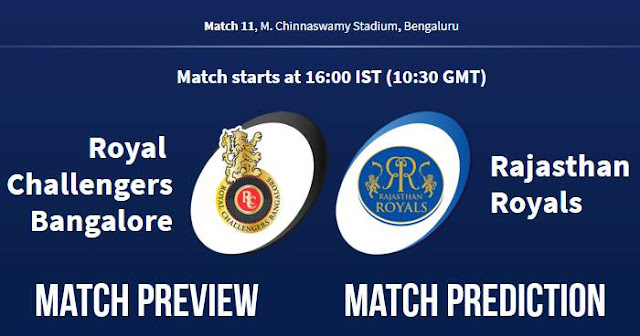 Royal Challengers Bangalore (RCB) will take on Rajasthan Royals (RR) in the 11th match of the 11th season of Indian Premier League (IPL 2018) tournament on 15th April 2018 at M. Chinnaswamy Stadium, Bengaluru. This will be a day match and weather as forecasted will be a cloudy evening, temperature around 30ºC.

This will be the second match played at Chinnaswamy in this season. As far as pitch is considered, the pitch is slow but is slightly better than the last year. Against the older ball, middle overs can be difficult to play; 170+ will be par score at this ground.

Royal Challengers Bangalore made a comeback against Kings XI Punjab after losing the first game against Kolkata Knight Riders. If RCB wins, it will be replacing CSK who is on the second place on the IPL 2018 points table with 4 points; RCB is currently on 5th spot with two points. On the other hand, Rajasthan Royal is on the 7th spot in the points table.

Batting unit of Royal Challengers Bangalore are looking strong but the bowling unit is a concern for RCB. It may be possible that RCB goes for this match with an extra spinner and drop out of form Sarfaraz Khan as the pitch is slow which would help them to save some runs in middle overs; Pawan Negi or Murugan Ashwin are options available who can also hit down the order.

Rajasthan Royals are struggling with the ball. The lead bowler Jaydev Unadkat is out for or may be under pressure for the price tag he got at the IPL 2018 Auction. 23 years old West Indies all-rounder Jofra Archer can be included in the playing XI to make the bowling attack stronger; he will most likely to replace Ben Laughlin.

In 5 matches played at M. Chinnaswamy Stadium, Bengaluru between RCB and RR, RCB had won 2 matches and RR had won 3 matches.