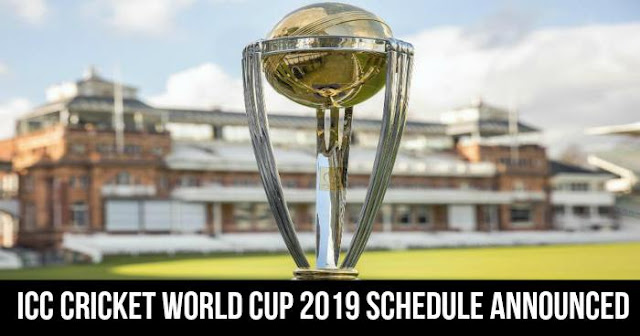 ICC has announced the ICC Cricket World Cup 2019 schedule, it will be played from 30 May 2019 to 14 July 2019 across England and Wales. The opening match will be played between England and South Africa on 30th May 2018 at The Oval, London. And Lord’s, England will host the final on 14th July.


The two semi-finals will be played at Old Trafford, Manchester and Edgbaston, Birmingham on 9 and 11 July 2019; whereas 10th and 11th, July is kept as the reserve day for the semi-finals. India will open their tournament on 5th June at Hampshire Bowl in Southampton against South Africa.


Single League format will be applied, after playing one match against every team, the top four teams will be qualifying for the semi-finals. There are 48 matches scheduled in the tournament; 45 league matches, 2 semi-finals and 1 final. The tournament is stretched to 46 days.

ICC Cricket World Cup will be played at 11 venues across England and Wales.


It’s always an exciting moment ahead of any major event to announce the schedule and for the ICC Cricket World Cup. Next summer fans around the world will be treated to compelling and competitive cricket as the best teams in the world go head to head in this round-robin format for the right to be crowned World Champions.


This schedule also gives fans across England and Wales the opportunity to watch world-class cricket on their doorstep with all teams moving around the country. We know from previous ICC events that every country will be proudly supported at each of the venues creating an exceptional atmosphere and a real celebration of the game.


Today’s announcement of the schedule is another important moment in the build-up to the ICC Cricket World Cup 2019 – the moment that the tournament comes to life for teams and cricket lovers across the world. This is the flagship event in one-day cricket.


There are some fantastic head-to-head fixtures – England v Australia at Lord’s and India v Pakistan at Old Trafford as well as England v India at Edgbaston spring to mind. As organisers we can promise the teams and fans we will work hard to provide the perfect stage for this event.


Because of the UK’s diverse population, every competing team will also be guaranteed a ‘home crowd’ every time they play at some of the most iconic cricket grounds in the world.


The Cricket World Cup is the third most-watched global event and has huge interest and appeal amongst cricket fans. Our ambition is to grow the game and deliver the greatest ever cricket celebration and with that in mind, we have very carefully developed our ticket prices.


The prices have been tested with thousands of fans over the last six months, we have used external experts and consulted widely to ensure that they are good value versus other global sporting events. The prices balance accessibility with delivering the investment required to deliver a world-class event. All revenue is invested back in the game to grow cricket.