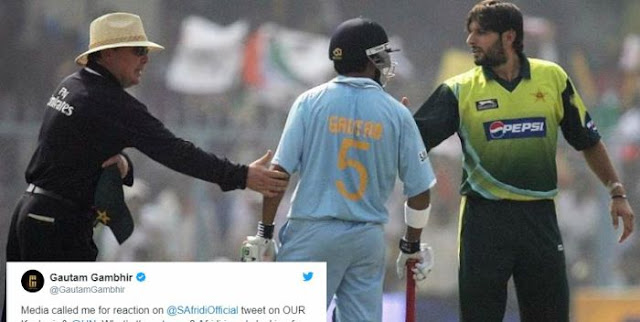 Indian cricketer Gautam Gambhir today slammed former Pakistan Cricket Captain Shahid Afridi following his tweet on “Kashmir Issue’ and pitching for 'self-determination and independence' of the Kashmir Valley. Gautam Gambhir said that Shahid Afridi “is, as usual, celebrating a dismissal off a no-ball".


What is there to say on Afridi's tweet on our Kashmir and UN. Afridi is only looking for UN which in his retarded dictionary means under nineteen - his age bracket. Afridi is celebrating a dismissal of a no ball,


Appalling and worrisome situation ongoing in the Indian Occupied Kashmir.Innocents being shot down by oppressive regime to clamp voice of self determination & independence. Wonder where is the @UN & other int bodies & why aren't they making efforts to stop this bloodshed? 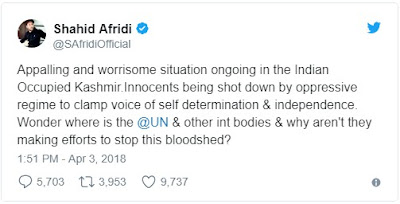 Shahid Afridi in a column for the ICC's official website in May 2017 had written,


Contrary to popular belief, India and Pakistan players get along very well. Of course, there are exceptions like Gautam Gambhir, who dare I say isn’t the friendliest.

We are unlikely to be found together at a coffee shop anytime soon. We had a heated exchange on the field some years ago and it made headlines all over the world. While I have moved on in life, Gautam for some reason can’t get over it,

Earlier in March 2017, Gambhir in an interview to an English Daily had said that "no matter what the age of Afridi is, he will always behave like a 16-year-old".

This is not the first time Shahid Afridi has raised the 'Kashmir issue'. He also raised the issue In March 2016, during the World Twenty20 against the match with Australia in Mohali, he had thanked fans from Kashmir for supporting his team.

The then BCCI secretary Anurag Thakur had called the Pakistani cricketer's remark “politically not correct”.