5 Most Expensive Players of IPL 2018 Retention 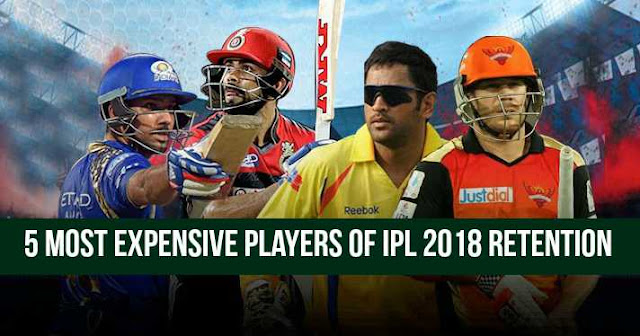 
For retaining the big players and the fan base of the team, the team franchise has to pay the price. So let’s look at the 5 most expensive player retention of IPL 2018:

The most successful captain of IPL, MS Dhoni was retained by Chennai Super Kings (CSK) for Rs. 15 Crores. CSK also announced MS Dhoni as its skipper and would be aiming to win the third title in its captaincy. MS Dhoni was paid Rs. 12.5 crores by Rising Pune Supergiant in 2016. The other two players retained by CSK was Suresh Raina for Rs. 11 crore and Ravindra Jadeja for Rs. 7 crores.

Mumbai Indians retained its skipper Rohit Sharma for Rs. 15 crores. Rohit Sharma is in great touch and also MI had played well under his captaincy. Rohit Sharma was retained for Rs. 11.5 crore in 2016 by MI. The other two players retained by MI were Hardik Pandya for Rs. 11 crore and Jasprit Bumrah for Rs. 7 crores.

Australian vice-captain David Warner, who is leading the side for IPL 2016, has been retained by Sunrisers Hyderabad for Rs. 12 crores. David Warner leads the side to win the title in IPL 2016. Bhuvneshwar Kumar was only another player to be retained by SRH for Rs. 8.5 crores.